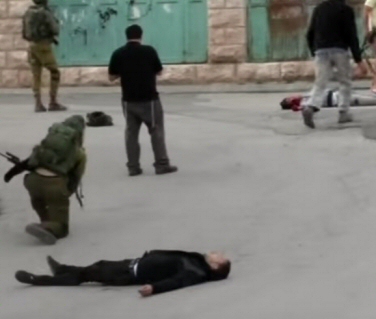 Human Rights Defenders (HRD) in Palestine released a video last week showing an Israeli soldier kicking a knife toward the body of Abd al-Fattah al-Sharif — who was shot point-blank in the head, by an Israeli soldier, in March — an action the group said represents a clear violation of international law.

The video shows an Israeli soldier casually kicking a knife — allegedly used by al-Sharif during an attempted stabbing attack — to the other side of the road in the town of Tel Rumeida in the southern occupied West Bank district of Hebron, as al-Sharif’s body lay a few meters away.

The footage was taken before al-Sharif was shot execution-style in the head by an Israeli soldier, a graphic video of which was released in March, leading to widespread condemnation by rights groups and the UN demanding an investigation into the apparent “extrajudicial execution.”

Badi Dweik, an activist from HRD, said in a statement released Saturday that the group decided to make the video public in order to challenge current narratives unfolding at the ongoing military trial of Elor Azaria — the Israeli soldier charged with manslaughter after killing al-Sharif.Azaria has claimed that he shot the immobilized Palestinian because he saw al-Sharif reaching for the knife, or feared he had explosives strapped to his chest.

However Azaria’s commander testified in court on Thursday that al-Sharif posed no threat before he was shot dead, and when asked why he shot al-Sharif, Azaria answered: ‘This terrorist was alive, and he needs to die.'”

An additional video surfaced at the start of June, showing an Israeli ambulance driver kicking the same knife near to al-Sharif’s body after he was killed.

According to Ma’an News Agency, the video footage, obtained by Israel’s Channel Two, was expected to be shown to an Israeli military court to disprove claims by the Israeli soldier who killed al-Sharif that he shot the young Palestinian point-blank in the head after al-Sharif moved to grab a knife, according to the Israeli media outlet Ynet.The footage shows that the knife allegedly used in the attack was far from al-Sharif when he was shot, notably showing an ambulance driving over the knife before it was kicked closer to al-Sharif’s body.The Israeli military prosecutor reportedly said that an Israeli ambulance driver, Ofer Ohanna, who was near the scene kicked the knife towards al-Sharif’s body following his murder, according to Hebrew-language news outlet Maariv.

The new video that has surfaced reveals that the ambulance driver was not the only one to tamper with evidence at the crime scene, but that an Israeli soldier also manipulated a piece of key evidence by moving the knife, which Dweik emphasized was a violation of international law.

Al-Sharif was shot alongside Ramzi Aziz al-Qasrawi after the two Palestinians allegedly stabbed and moderately wounded an Israeli soldier at a military checkpoint in the Tel Rumeida area of Hebron on March 24.Although it was widely believed that Al-Qasrawi was killed immediately, new witness accounts documented by Israeli human rights group B’Tselem have since emerged that “raise concerns that al-Qasrawi was also executed with a shot to the head, as he lay injured on the ground after having been hit by gunfire elsewhere in his body.”

Al-Sharif, meanwhile, was left severely wounded for several minutes without treatment, before Azaria stepped forward and put a bullet through his head, killing him.Azaria was charged with manslaughter, rather than murder as had initially been expected, and is being held on a military base in “open detention” where he is free to roam and has received visits from his family.

His trial opened in early May.

Palestinians have long held fears that Israeli soldiers and settlers tamper with crime scenes involving Palestinians, with human rights groups accusing Israel of practicing a policy of extrajudicial executions since a wave of violence erupted in October, leaving more than 200 Palestinians and some 30 Israelis killed.