Al-Sisi to Mediate Between Palestinian Factions 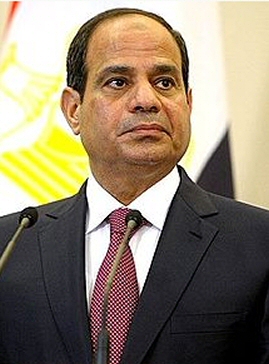 nsnbc : Egyptian intelligence and Egypt’s President Abdel Fateh Al-Sisi will attempt to mediate the dialog between Palestinian factions, including Al-Fateh, PFLP, DFLP the PPRM as well as Hamas.

Abbas reiterates that he would accept NATO troops in the West Bank and along the Jordanian border as part of a peace agreement. Egypt announced its willingness to deploy troops to Palestine in the future to guarantee its safety.

The delegates went to Cairo at the invitation of Egypt’s intelligence service. On the agenda are the resumption of talks and reconciliation between these factions and the governing Al-Fateh.

The PFLP is the second-largest constituent member of the Palestine Liberation Organization (PLO), which is officially the only organization that legally can represent Palestine in international affairs.

The PFLP, as well as the DFLP and other factions have, among others, denounced Al-Fateh for having usurped and monopolized power in the Al-Fateh dominated Palestinian Authority (PA).

The PA has, among others, been accused of negotiating international agreements without as much as informing the appropriate fora within the PLO.

The PA and Al-Fateh have also, repeatedly been accused of using the PA’s “security cooperation” with Israel as a means to crack down on and oppress other parties.

Especially the PFLP and the DFLP also denounce the PA and Al-Fateh of negotiations, unauthorized by the PLO, that would eventually deprive Palestinian refugee communities of the internationally guaranteed right of return in exchange for “economic compensation” that would, according to Israeli demands, have to be paid by “host countries” , as well as in exchange for “special privileges” in these host countries.

It is expected that a delegation from the Al-Fateh movement, chaired by Azam al-Ahmad, as well as another delegation from the Muslim Brotherhood affiliated Hamas, headed by Mahmoud al-Zahar, will arrive in Cairo soon to participate in the negotiations.

The invitation of the Palestinian factions has been extended via Egypt’s intelligence service and on the initiative of Egypt’s President Abdel Fateh Al-Sisi.

The Egyptian President met with PA President Mahmoud Abbas in Cairo prior to the Paris talks on Palestine. On May 18 Al-Sisi said that he would offer his assistance to mediate between the Palestinian factions so as to reach an agreement with regards to facilitating renewed talks with Israel based an a united Palestinian front.

Al-Sisi has repeatedly stressed that Egypt supports the sovereignty of Palestine within the borders of 1967. Al-Sisi has recently also reiterated that Egypt could consider the deployment of Egyptian troops to the Palestinian State to guarantee its safety. Contrary to Al-Sisi, PA President Mahmoud Abbas recently reiterated that he would welcome NATO troops, a statement that has caused serious concerns among other factions.