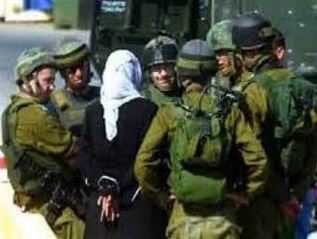 Israeli soldiers invaded, on Friday at dawn, dozens of homes in the West Bank districts of Qalqilia, Ramallah, Jerusalem, Bethlehem, and Tubas, and kidnapped six Palestinians, including one woman.

The Palestinian Prisoners Society (PPS) has reported that the soldiers invaded Qalqilia city, in the northern part of the West Bank, and kidnapped a woman, after storming her home, looking for her son, who was not there during the attack.

The invasion led to clashes between the soldiers and local youths; the army fire many gas bombs and concussion grenades.

In addition, the soldiers kidnapped a young man, identified as Odai Asfour, after invading and searching his family’s home, in Sinjel town, in the central West Bank district of Ramallah.

The soldiers also invaded Budros town, west of Ramallah, and drove around its neighborhoods, before withdrawing without conducting any arrests.

The PPS also said that the soldiers kidnapped two young men, identified as Mohammad Sbeih and Nader al-Basha, after the army invaded and violently searched many homes, in Hizma town, northeast of occupied Jerusalem.

Clashes also took place in Bab Hatta area in Jerusalem, and Abu Dis nearby town, after the soldiers invaded them. The army fired many concussion grenades and gas bombs, causing many Palestinians to suffer the effects of teargas inhalation.

The soldiers also fired many gas bombs and concussion grenades during the invasion, no injuries were reported.

Furthermore, the soldiers invaded Tubas city, and kidnapped one Palestinian, identified as Ahmad Kamal Daraghma, 22, after storming his home and violently searching it.