Anadolu Photojournalist Back in Israeli Jail 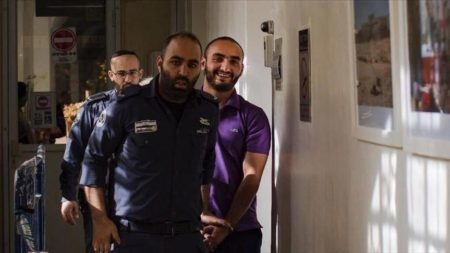 After failing to deport him to Jordan, Israeli authorities returned an Anadolu Agency photojournalist to a detention center, on Monday, where he has been detained for six months, according to his lawyer.

Kharouf’s lawyer explained that she had not yet had the opportunity to speak by phone with her client, stressing that they would press for his release through all legal avenues.

“Developments since yesterday evening have shown that there is no other place for Kharouf to go but Jerusalem,” the city he covered, the lawyer added.

Kharouf will face an Israeli court on Aug. 8, said Lustigman.

Lustigman stressed that she will request a meeting with Kharouf and his release as soon as possible.

A source at Jordan’s Foreign Ministry told Anadolu Agency that they blocked the deportation as he does not hold Jordanian nationality.

The deportation was also blocked due to the “illegal way that Israel tried to get him in,” the source added anonymously due to restrictions on speaking to the media, without giving further details.

Israel has not commented on the reports.

Earlier Monday, a friend of Kharouf told Anadolu that he has not been heard from since an Israeli decision to deport him to Jordan.

Kharouf was detained by Israeli police in East Jerusalem on Jan. 22 and held in prison in advance of his planned deportation.

Israeli authorities say that Kharouf, who has lived in Jerusalem with his family since he was 12, was born in Algeria.

“He told me during a phone call from prison on Sunday that Israeli authorities will deport him to Jordan today,” his friend, who spoke on condition of anonymity, told Anadolu.

For the last 20 years, Israeli authorities have consistently refused to grant Kharouf a long-term residency permit, forcing him to get fresh tourist visas each year.

While Kharouf holds a Jordanian passport that allows him to travel to neighboring Arab states, it does not give him citizenship or residency rights in Jordan.

Israel occupied East Jerusalem, in which the flashpoint Al-Aqsa Mosque compound is located, during the 1967 Arab-Israeli War.

In a move never recognized by the international community, Israel annexed the entire city in 1980, claiming it as the self-proclaimed Jewish state’s “eternal and undivided” capital.

Jerusalem remains at the heart of the decades-long Middle East dispute, with Palestinians hoping that East Jerusalem might one day serve as the capital of a Palestinian state.