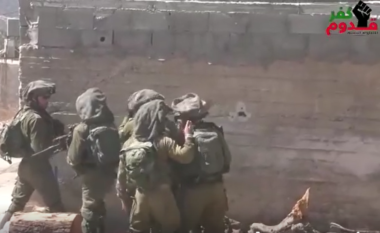 An Israeli army officer smacked, Friday, his fellow soldiers for cowering and running away from unarmed Palestinian protesters, who hurled stones at them, after the army invaded Kufur Qaddoum town, east of the northern West Bank city of Qalqilia, and attacked the weekly procession.

Dozens of soldiers invaded Kufur Qaddoum and attacked the protesters with gas bombs, concussion grenades, and rubber-coated steel bullets, before many local youngsters started throwing stones at them.

The Palestinain protesters managed to get to a close range from the soldiers who started running away while firing many rubber-coated steel bullets.

An Israeli army officer then got angry at his fellow soldiers for cowering and running away from the local unarmed Palestinian protesters, and started smacking them on their helmets.

It is worth mentioning that, during the procession in Kufur Qaddoum, the soldiers injured two Palestinain protesters and on Israeli peace activist.