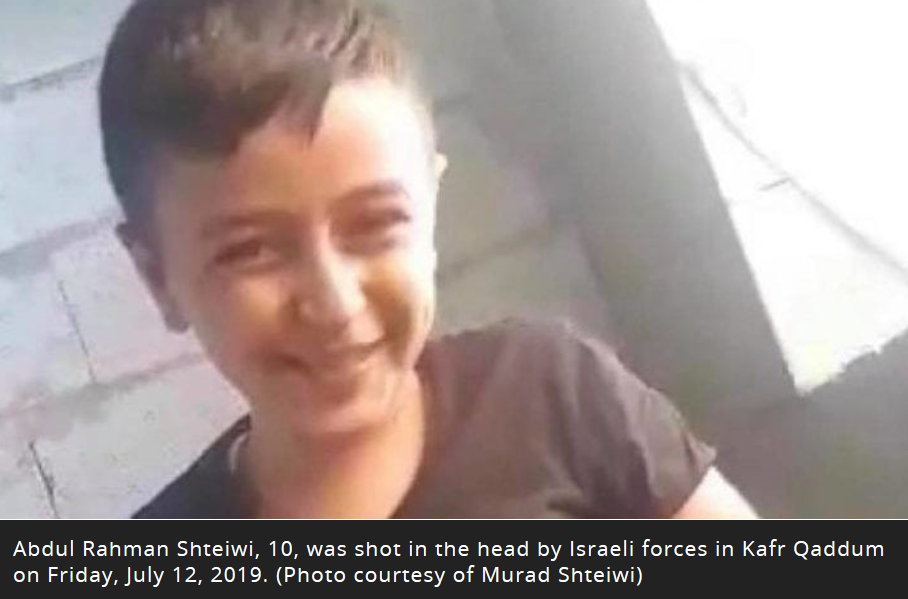 The Israeli military continues to deny wrongdoing in the case of Abdul Rahman, despite diverse evidence of the opposite. The young boy remains bedridden and immobile while his family struggles to make ends meetŌĆ”

ItŌĆÖs been almost three months since 10-year-old Abdul Rahman Shteiwi was shot in the head by Israeli forces in his village of Kafr Qaddum in the northern occupied West Bank.

What was a typical day of Friday protests on July 12 turned bloody when Israeli snipers shot the boy as he was standing at the entrance of his friendŌĆÖs house in the village.

Since that day, Shteiwi has remained in the Tel Hashomer Hospital in Tel Aviv, unable to speak or move his body.

ŌĆ£The doctors still arenŌĆÖt sure exactly how much of his brain function has been permanently damaged,ŌĆØ Murad Shteiwi, a relative of the family and local activist in Kafr Qaddum told Mondoweiss.

ŌĆ£He canŌĆÖt move his hands or legs, he canŌĆÖt speak. HeŌĆÖs awake, but he canŌĆÖt do anything,ŌĆØ he said, adding that much of the nearly 100 pieces of shrapnel initially found in the boyŌĆÖs head are still lodged in his brain today.

Despite accounts from eyewitnesses, activists, and the doctors who treated him all saying that Shteiwi was shot with live ammunition, Israeli forces have maintained that they did not use live fire during protests on July 12th.

ŌĆ£There are several reports done by international organizations that proved Abdul Rahman was shot with a live bullet,ŌĆØ Shteiwi told Mondoweiss. ŌĆ£The Israelis wonŌĆÖt admit it, but there is enough documentation to prove that they shot live ammunition.ŌĆØ

The last reported statement from the Israeli military on ShteiwiŌĆÖs case was in an August report from the Times of Israel that quoted an anonymous source, saying ŌĆ£the army was investigating, but insisted no live fire was used that day and the boy was not targeted.ŌĆØ

Last month, at London-based research agency Forensic Architecture, came out with a┬Ādetailed report using videos, photos, and eyewitness testimony from the day Shteiwi was shot to piece together a timeline of events leading up to the shooting.

ŌĆ£Contrary to the repeated claims of Israeli officials, the available medical and image evidence, as well as witness testimony, strongly suggests that Abd el-RahmanŌĆÖs injuries were caused by live ammunition,ŌĆØ the Forensic Architecture report states.

The groupŌĆÖs lengthy report provides evidence of 5.56mm bullets that were shot into a water tank near the clashes, in addition to other bullet casings found in the village.

Notably, Forensic Architecture compared a video of a soldier firing at a protester on July 12 in Kafr Qaddum with a separate video taken at a different location that shows ŌĆ£what the process of firing and reloading rubber-coated metal bullets looks like.ŌĆØ

In the latter video, soldiers can be seen loading rounds into an attachment designed specifically for rubber-coated bullets, whereas in the video taken in Kafr Qaddum, the same actions are ŌĆ£clearly not performed by the soldiers.ŌĆØ

While the Israeli military continues to deny wrongdoing in the case of Abdul Rahman, the young boy remains bedridden while his family struggles to make ends meet.

ŌĆ£His family is in a really tough spot,ŌĆØ Murad Shteiwi told Mondoweiss, adding ŌĆ£they were never well-off to begin with, economically, but things have gotten a lot worse.ŌĆØ

ŌĆ£Abdul RahmanŌĆÖs father was working in construction before this, but has since had to quit work to stay by his sonŌĆÖs side in the hospital,ŌĆØ he said, adding that the boyŌĆÖs mother has suffered from multiple heart attacks, one on the day of the shooting, rendering her unable to stay with her son or work to support the family.

For now, Abdul RahmanŌĆÖs oldest brother is supporting his entire family of seven. ŌĆ£The Palestinian Ministry of Health has offered to pay off all of Abdul RahmanŌĆÖs medical bills, but the familyŌĆÖs basic income has been affected a lot,ŌĆØ Shteiwi said.

According to Shteiwi, the family has begun the process of filing a suit against the military in court.

ŌĆ£We know the Israeli ŌĆśjusticeŌĆÖ system, through our experience, is broken,ŌĆØ he told Mondoweiss, saying ŌĆ£even if the case is clear, and we prove to the court the soldiers were in the wrong, the soldiers will be let off the hook, maybe with a slap on the wrist, if weŌĆÖre lucky.ŌĆØ

ŌĆ£But if we cannot find justice in the Israeli courts, we will go to the international courts. We must hold these soldiers accountable so that, God willing, Abdul Rahman will be the last Palestinian child to suffer this fate.ŌĆØ

Yumna Patel is the Palestine correspondent for Mondoweiss.

Jerusalem Minister: ŌĆ£I Was Forced To Wear A Dirty Mask, With Signs Of Dried Blood On ItŌĆØ