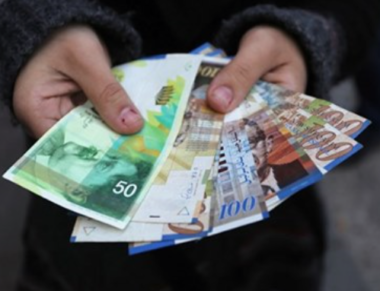 Following a Thursday meeting between the Israeli Finance Minister Moshe Kahlon and his Palestinian counterpart Hussein Sheikh, the former stated that Israel will be transferring 1.8 Billion Shekels from the Palestinian tax money Israel has been withholding and refusing to transfer.

Israeli TV Channel 13 said the money is part of 3 Billion Shekels Israel is refusing to transfer to the Palestinian Authority to pressure it into stopping the salaries and pensions paid to families of Palestinians who were killed by the army, the wounded and the political prisoners.

Although Israel still insists on stopping these payments, Kahlon agreed on the transfer of the 1.8 Billion Shekels, after the Palestinian side refused the Israeli interference in internal affairs, and the necessity of these payments to support the bereaved families, the wounded and the detainees, in addition to providing assistance to needy families.

Sheikh stated that another meeting will be held this coming Sunday to discuss all related issues and that an agreement was reached to reactivate the joint committees between the two parties.

Israel repeatedly holds and refuses to transfer billions of dollars from money it collects on border terminals in the occupied West Bank, including the taxes and fees it imposes on Palestinian imports and exports.

Palestinians living in the occupied West Bank cannot travel into and out of the territories without crossing through the Israeli controlled border terminal, known as Allenby or al-Karama. Israel collects money from the Palestinian travelers, in addition to collecting tax and customs on imports and exports.