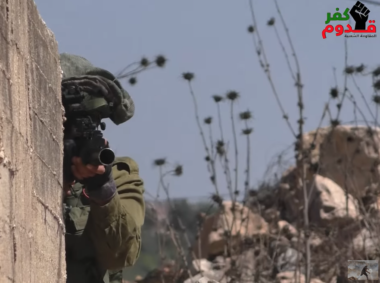 Israeli soldiers injured, Friday, two Palestinians and one Israeli peace activist, in Kufur Qaddoum town, east of the northern West Bank city of Qalqilia, after the army attacked the weekly procession.
The Popular Committee in Kufur Qaddoum said several army jeeps invaded the town after the procession started, and added that a large number of soldiers started chasing the protesters.

Several protesters then started throwing stones at the soldiers, forcing some of them to run away.

The soldiers fired many rubber-coated steel bullets, gas bombs and concussion grenades at the protesters, wounding two, while a third was injured after falling down while the soldiers were chasing him. One of the wounded is a leftist Israeli peace activist.

The Popular Committee said the invasion into the town is the second since Thursday at night, after the army drove in several streets and alleys, and flew its drones.