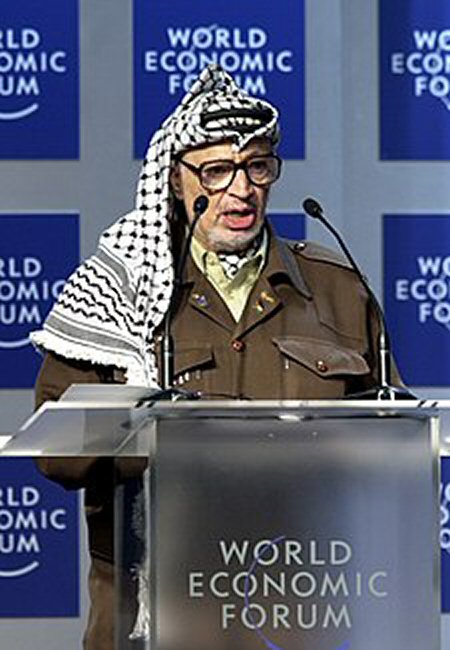 Thousands of Palestinians, yesterday, held rallies in the West Bank city of Ramallah to commemorate the 13th anniversary of the death of iconic Palestinian leader Yasser Arafat.

Thousands of Palestinians joined a rally, organized by Fateh and other Palestinian factions, to mark this anniversary, carrying portraits of Arafat, waiving Palestinian flags and chanting slogans celebrating Arafat’s life.

According to WAFA correspondence, the rally started from Ramallah Secondary Boys School, roaming the main street towards the presidential headquarters (Muqata’a), where senior officials laid wreaths at Yasser Arafat’s mausoleum.

Addressing the rally on behalf of President Mahmoud Abbas, Deputy Fatah Chairman Mahmoud al-Aloul said: “Not only was Yasser Arafat the leader who inspired the Palestinian revolution, but also the one who inspired liberation movements worldwide.”

He stressed: “We will remain committed to our independent decision. We could not accept ]any solution[ unless it commensurate with the Palestinian people’s ]national aspirations[.”

He expressed the Palestinian leadership’s rejection of any talk about achieving “the deal of the century in the Middle East” as well as any other ideas and proposals that are not based on the Palestinian people’s right to attain freedom and independence.

He reaffirmed the Palestinian leadership’s ongoing efforts to restore national unity and stressed the need that all ]Palestinian[ factions commit to the independent Palestinian decision.

Member of PLO Executive Committee Wassel Abu Yousef expressed the Palestinian leadership and people’s firm attachment to Arafat’s ideals and values and to the realization of their inalienable rights, including the right to establish an independent state on their national soil with East Jerusalem as its capital.

This came as Palestinian students held activities to mark this anniversary across West Bank schools.

In Hebron, Israeli forces disrupted the commemoration of the death of late iconic Palestinian leader.

Large number of troops surrounded a number of schools in Hebron, preventing students from exiting and firing tear gas canisters at students and civilian homes, causing several to suffocate.

However, the main anniversary commemoration activity will be held in Gaza on Saturday November 11, the same day Arafat died 13 years ago at a Paris hospital where he was rushed following deterioration on his health after being under Israeli military siege at his Ramallah headquarters for months.

The Gaza rally, made possible after the recent reconciliation between Fatah and Hamas, is going to be held at the Saraya grounds.