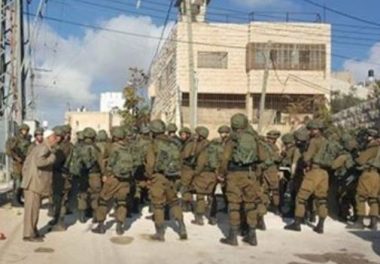 Dozens of Israeli soldiers surrounded many, Thursday, schools in the Old City of Hebron, in the southern part of the occupied West Bank, and prevented students and staffers from entering them, in an attempt to stop planned commemorations of late Palestinian President Yasser Arafat.

Aref Jaber, a local human rights activist, said dozens of soldiers surrounded a school, near Keryat Arba’ illegal colony, before preventing students, their families and teachers from entering it.

He added that the Palestinians eventually managed to enter the school, despite the extensive military deployment. The soldiers also surrounded the al-Hajiriya School, and Hebron Elementary School, in the southern area of Hebron city, prevented the students from entering them, and fired many gas bombs, causing many Palestinians, mainly children, to suffer the effects of teargas inhalation.