Another Home Demolished by Israeli Forces in Silwan 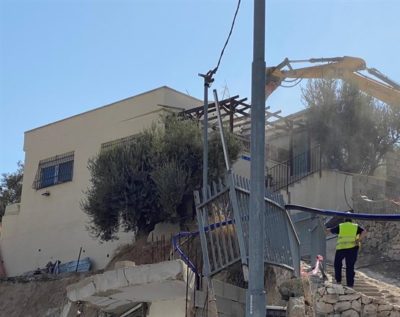 In the East Jerusalem town of Silwan, Israeli troops demolished a Palestinian home on Tuesday on the pretext of it having been ‘built without a permit’. Israeli authorities have not granted building permits to Palestinian homeowners since they began occupying the city in 1967.

In addition to destroying one family home, Israeli authorities also posted demolition orders on a number of other homes in the al-Isawiya neighborhood – which has been targeted, along with Silwan, for Israeli colonization.

According to the Wadi Hilweh Information Center, the Israeli municipal officials, accompanied by Israeli police and special forces, invaded the neighborhood of Abu Tayeh, in Silwan, and demolished  the two-story family home of Mu’tasim al-Abbasi.

Mohammed Abu al-Homs, a member of the Popular Committee in al-Isawiya , told reporters with the Ma’an News Agency that Israeli officials posted notices on at least 10 Palestinian homes in al-Isawiya .

The notices demanded that the homeowners come to the Israeli municipal building office to be given demolition orders for their homes which were “constructed without licenses” – despite the fact that Palestinians have not been issued any licenses to build on their own property for more than fifty years.

During their invasion, Israeli forces abducted a young boy under the pretext of throwing stones.

This latest provocation against the residents of East Jerusalem comes in the midst of an open-ended school strike declared on Saturday due to the constant Israeli invasions of al-Isawiya during and after school.

Israeli forces abducted one of the organizers of the school strike, Mahmoud Mahmoud, with the Parents’ Committee of al-Isawiya , in a pre-dawn raid on Tuesday. 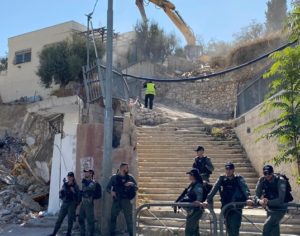