Protest in Gaza Demanding Compensation for 1,000 Homes Bombed by Israel in 2014 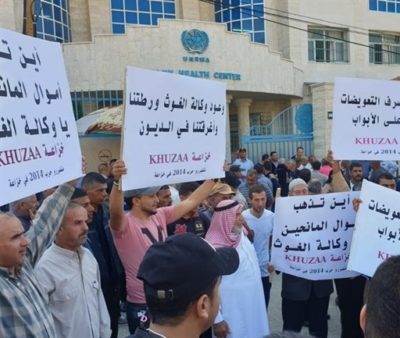 Palestinians who lost their homes due to the Israeli invasion and bombardment of Gaza in 2014 held a protest on Tuesday in Khuza’a, east of Khan Younis, which was one of the most heavily bombed areas of Gaza during the 2014 invasion.
The people participating in the protest held signs demanding compensation to be able to rebuild their homes – many of which remain in complete rubble since the massive bombardment five years ago.
Around 1,000 Palestinian families have yet to receive any compensation to be able to rebuild what they lost during the Israeli attack.
The protesters called on the United Nations to take action to compensate the families, to be able to construct some shelter before winter begins in Gaza.
Some of the protesters recited poems and others chanted for justice.
One of the protest organizers, Salah al-Najjar, said they were targeting the United Nations agency UNRWA — which was recently de-funded by the U.S. Administration of Donald Trump.
Najjar told reporters that the message of the demonstrators is that their patience is running out, as the Gazan economy is in freefall, and they have been unable to rebuild their homes for five years.
In the 2014 invasion of Gaza, Israel destroyed about 1,000 houses, partially and partially, in Khuza’a village east of Khan Younis in the southern Gaza Strip.