Another Palestinian Family Forced To Demolish Its Home In Occupied Jerusalem 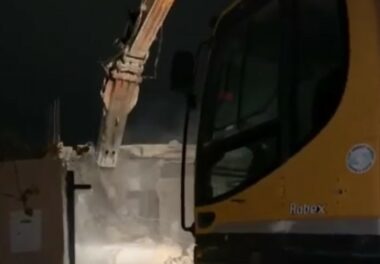 The Israeli occupation authorities in Jerusalem forced, on Sunday evening, a Palestinian family to demolish its home in Sur Baher village, southeast of the occupied Palestinian capital, Jerusalem, in the West Bank.

Media sources said Palestinians from Abu Kaf local family in Sur Baher village was forced to demolish its home after the City Council threatened to force it to pay 150.000 Shekels in fines and fees if the city carries the demolition out using its workers and equipment.

The home’s owner, Ibrahim Abu Kaf, said that he and his family of seven have been living in their home after constructing it more than eleven years ago. “Our home was only 120 square/meters, and we have been paying fines that have already cost us at least 65.000 Shekels, we paid the fines in monthly installments and tried to get our paperwork to license our home, but the city kept denying our applications and appeals,” Ibrahim Abu Kaf said.

“A few days ago, the soldiers invaded our neighborhood and handed us a final demolition order, although we have been paying the fines and trying to conduct all needed procedures; we tried all legal means available to us” he added, “All in all, these applications and procedures have cost us more than 30.000 Shekels, yet the city said we had to demolish it before 4 at dawn, Monday.

“This is the tax we pay for living in our city, in occupied Jerusalem,” Ibrahim added.

On Sunday, January 7th, the family of Naim Hmeidan Qara’in, was forced to demolish its home in Silwan town, in Jerusalem.

On Wednesday, January 5th, the army demolished a Palestinian home in Silwan, while on January 1st, two other Palestinians were also forced to demolish their homes in the town.