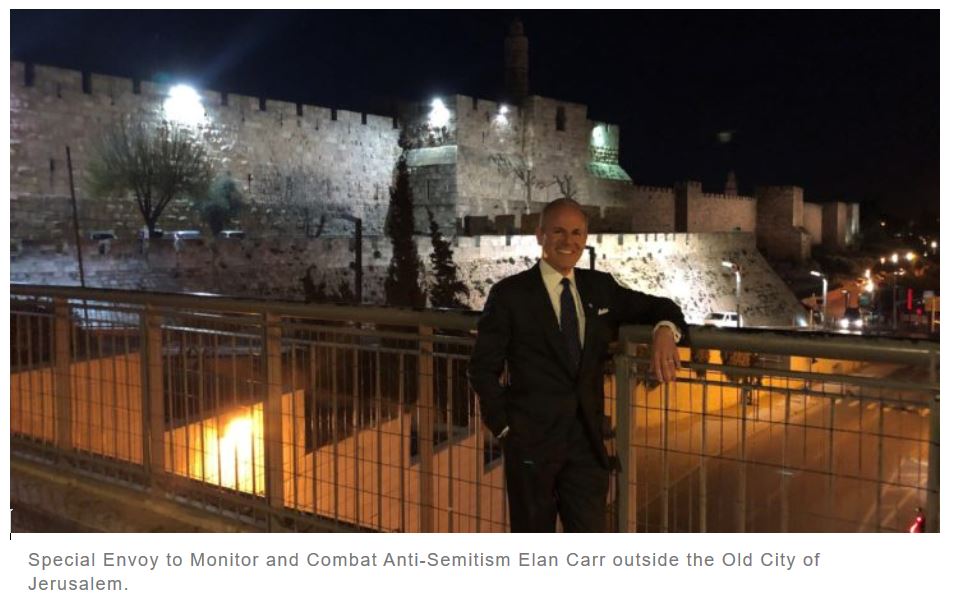 Trump’s anti-Semitism envoy inaccurately equates anti-Zionism with anti-Semitism, and considers Israel “a central tenet” of Judaism – despite vocal opposition from within the global Jewish community… Carr demands: “Every law enforcement office and every prosecutorial agency must force everybody who has even a hint of antisemitism to undergo a tolerance program.”

by Kathryn Shihadah. If Americans Knew

In his first month on the job, February 2019, the new Special Envoy for Monitoring and Combating anti-Semitism quickly defined his top priority: policing the world based on a far-right, Israel-centric definition of anti-Semitism. And in the months since, he has escalated his extremist actions.

Elan Carr redefined Judaism by including Zionism as “a central tenet” of the culture and religion – a position incompatible with many progressive Jewish groups.

Carr’s State Department bio indicates that he served on the National Council of the American Israel Public Affairs Committee (AIPAC), was a voting member of the Conference of Presidents of Major American Jewish Organizations, and was the international president of the Jewish fraternity Alpha Epsilon Pi; all are committed to Israel.

It appears that Carr’s mother is an Israeli citizen; It is unknown whether Carr himself also has Israeli citizenship. The Times of Israel reports: “Carr has described casino mogul Sheldon Adelson, who backed his unsuccessful political runs, as a ‘close personal friend.’” (For more on Adelson see this, this, and this.)

“There is no distinction”

He elaborated during a visit to a Jewish student group at UC Berkeley: “Zionism isn’t an extrinsic feature of Judaism; It’s an essential part of Judaism, a central tenet” of the culture and religion.

Many Jews disagree with Carr’s claim, and have done so for decades, including authors Alfred Lilienthal and Rabbi Elmer Berger and the American Council on Judaism in the 1940s.

The Israel Ministry of Foreign Affairs identifies the birth of Zionism as 1897, with the call for a Jewish home in historic Palestine. Its modern origin contradicts Carr’s assertion that the ideology is an intrinsic component of Judaism.

In an interview with the Times of Israel, Carr described what he claims is the pervasiveness of anti-Semitism: “My goodness, it’s become almost accepted to publicly talk about how detestable the State of Israel is and how detestable Zionism is. It’s the unthinkable, but it’s become common,” he said.

In reality, BDS is based on “the simple principle that Palestinians are entitled to the same rights as the rest of humanity.”

Carr expressed the claim that the anti-Zionism he sees today is a denial of the alleged Jewish right to a homeland and to the practice of their faith:

There is a greater rise in new antisemitism that clothes itself as anti-Zionism. The antisemitism of the European street, of the college campus and of those that have embraced the notion that the Jewish people don’t have a right to their homeland.

Zionism wasn’t born in 1948 or with (Theodor) Herzl or with the First Zionist Congress [1897]. Zionism started with Parshat Lech-Lecha (the Torah portion on God’s call in Genesis to Abraham to settle the land of Israel), with Moses and on the banks of the river of Babylon.

Carr intimates that critics of Israel do not believe in the Jewish right to a homeland because they are Jews. This oversimplification ignores crucial objections to the creation of that homeland, especially the ethnic cleansing of Palestinians to make room for a population that was Jewish.

Carr’s suggestion that Israel’s existence is based on Scripture has been called “the founding myth of Zionism”; Yossi Gurvitz (like others before him) recently debunked the theory using historical fact. Even for those who stand behind a “literal” interpretation of the Bible, a Jewish exclusive right to the land is problematic at the very least.

While the Anti-Defamation League says that right-wing extremism was behind nearly every hate-related killing in 2018, Carr said that anti-Semitic hate can come from both the left and the right, and announced: “I intend to fight anti-Semitism in all its forms, regardless of the ideological clothing in which it dresses itself.”

Carr insists that the US is unique in its readiness to fight anti-Semitism and support Zionism:

While Jews almost universally see anti-Semitism as a problem, many vehemently disagree with Carr’s depiction of Israel as “an essential part of Judaism, a central tenet.”

Likewise, a large number dispute his statement that “there is no distinction” between anti-Zionism and anti-Semitism.

Elan Carr frames his objection to anti-Zionism as rejection of Jews’ rights to a homeland where they can observe their faith in its land of origin; those who oppose Zionism do not necessarily dispute the right of Jews to live and worship in historic Palestine.

Rather, anti-Zionists criticize the exclusivist ideology that includes harsh, racist beliefs and practices.

A number of Jewish groups oppose Zionism both in the US and around the world – for example Canada, France, Britain, and South Africa, to name a few.

Jeff Halper, a Jewish activist living in Israel, wrote, “Regardless of Zionism’s claim to have begun as a genuine national movement, [it became an]…unacceptable and unsustainable settler colonial enterprise.”

Zionism perpetuates Jewish exceptionalism. In defense of its crimes, Zionism tells a version of Jewish history that is disconnected from the history and experiences of other people. It promotes the narrative that the Nazi holocaust is exceptional in human history — despite it being one of many holocausts from Native Americans North and South to Armenia and Rwanda. It sets Jews apart from the victims and survivors of other genocides instead of uniting us with them.

The moment when the Zionist movement decided to build a Jewish State in Palestine, it became a movement of conquest. Like the imperial conquest and genocidal ideologies of the Americas or Africa, Zionism depends on the segregation of people and the confiscation of land that produces ethnic cleansing and depends on unrelenting military violence.

The Zionist sense of being under constant existential threat enables an attitude that, in the words of one Jewish Israeli,

so demeans and dismisses and conflates Palestinian lives, that after a horrendous casualty rate in massive demonstrations at the Gaza border [a government spokesman said of] the men, women, children and elderly protesters camped  “All 30,000 are legitimate targets.”

An Ethiopian-Israeli writes of Israel’s policy that seeks to deport 37,000 Jewish Eritrean and Sudanese refugees (which Israel calls “infiltrators”) back to Africa “out of fear of the ‘Africanization of Israel.”

Of the 37,000, the Jewish State recognized just ten Eritreans and 1 Sudanese as refugees in eight years. (According to Human Rights Watch, the EU has an acceptance rate of 90% for Eritreans and 60% for Sudanese.)

A society that endorses a 40-year occupation of another people cannot be a liberal one. A society that discriminates against 20 percent of its population because they are not Jews cannot be described as progressive. The problem in Israel is not the role of religion or tradition; it is the role of Zionism, a very clear ideology of exclusion, racism and expulsion.

Orthodox Rabbi Joseph Hayyim Sonnenfeld of Brisk wrote in 1898 that Zionists have “asserted their view that the whole difference and distinction between Israel and the nations lies in nationalism, blood and race, and that the faith and the religion are superfluous.”

One Hasidic branch of Judaism that originated in Israel, Neturei Karta, states: “The Zionist movement created the Israeli state. The latter is a persuasion less than one hundred years old. Its essential goal was and is to change the nature of the Jewish people from that of a religious entity to a political movement.”

Origin of the ‘Special Envoy on Anti-Semitism’

The Office to Monitor and Combat Anti-Semitism is a part of the Office of Religion and Global Affairs (S/RGA) under the US Department of State. It was created during the George W. Bush administration by the Global Anti-Semitism Review Act of 2004 over the objections of the State Department, and has been part of an ongoing, long-term campaign to redefine anti-semitism to include criticisms of Israel.

In his position as special envoy, Carr has attended a number of conferences on “combating antisemitism” that work to embed the new definition of anti-semitism in institutions around the world.

At an October conference in Munich sponsored by the World Jewish Congress, Carr  said that  “every law enforcement office and every prosecutorial agency” must “force everybody who has even a hint of antisemitism to undergo a tolerance program.”

This month, Carr delineated his belief that anti-Semitism comes from three distinct sources: right-wing white supremacists and neo-Nazis; “radical Islamists”; and left-wingers who demonize and delegitimize Israel. All of them, he said, must be addressed: “When you leave two-thirds of a tumor untreated or even one-third of a tumor untreated, the patient doesn’t do well,” he said.

Carr also indicated that it is not enough to combat all forms of hatred – anti-Semitism, he claimed, is a special case “in terms of its relentlessness, its ubiquity, and destructive power.” Carr’s statement belies the fact of Jewish prosperity: according to Pew research, Jewish Americans constitute the wealthiest religious group in the U.S.

When asked how best to combat anti-Semitism in the US, he listed several Trump initiatives as part of the administration’s “fight against anti-Semitism”: moving the U.S. embassy from Tel Aviv to Jerusalem, recognizing Israel’s sovereignty over the Golan Heights, and cutting off aid to the Palestinian Authority.

It is unclear how any of these actions – each of which has drawn loud criticism from the international community and Jewish groups in the US – actually fight anti-Semitism.

Carr also pointed to the Department of Education decision to define Jewishness as a “race or national origin,” not just a religion. This puts Jewish students under Title VI of the Civil Rights Act, protecting them from discrimination on campus.

Congressman Brad Sherman (D-CA-30) called the move “a milestone in an eight-year effort to protect Jewish college students from anti-Semitism masquerading as legitimate criticism of the Israeli government,” but experts worry that the shift will enable the silencing of Palestine advocacy on college campuses.

President Trump signed an executive order to the same effect this week, with Carr speaking at the event. While the order was officially entitled “combating anti-Semitism,” in reality it largely focused on combating criticism of Israel.

Kathryn Shihadah is staff writer for If Americans Knew. She blogs at Palestine Home.