Apartheid is Always Bitter! A Palestinian Appeal to Chefs to Withdraw from Round Tables in Tel Aviv 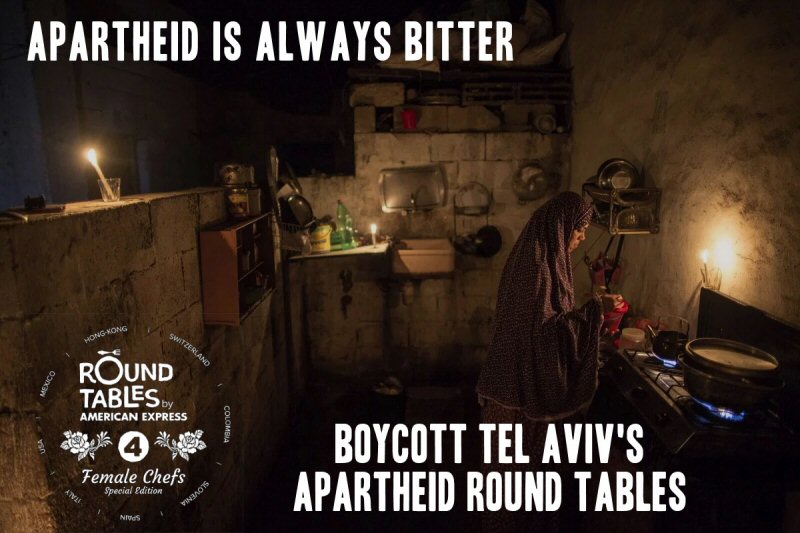 We, the undersigned workers‚Äô, womens‚Äô and farmer‚Äôs associations, appeal to chefs to cancel their participation in Round Tables 2018, scheduled to take place in Tel Aviv from November 9-23. It is an attempt to whitewash Israel‚Äôs grave violations of Palestinian human rights.

Several world-renowned chefs withdrew from previous editions of the culinary festival, sponsored by the Israeli Foreign Ministry, after learning of the festival‚Äôs agenda.

This year, the festival is using a feminist facade, through its ‚Äúfemale edition‚ÄĚ theme, to cover-up Israel‚Äôs decades-old system of occupation and apartheid. Palestinian women bear the brunt of of this system‚Äôs crimes and are doubly marginalized as a result.

Round Tables claims to promote ‚Äúcultural, economic and political dialogue through gastronomy,‚ÄĚ while 72% of Palestinians besieged in Gaza are food insecure.

Israel, in fact,¬†calculates¬†the number of calories needed to bring Palestinians in Gaza to the brink of starvation. These calculations are a basis for Israel‚Äôs siege. As¬†reported by BBC,¬†in 2006, Israeli government adviser Dov Weisglass said, “The idea is to put the Palestinians on a diet, but not to make them die of hunger.”

Israel‚Äôs occupation snipers have recently killed over 150 unarmed Palestinian medics, protestors and journalists, including many children, in Gaza as they protested for their basic rights under international law. ¬†Amnesty International condemned Israel‚Äôs¬†shoot-to-kill-or-maim¬†policy.

That is why we, with the majority of Palestinian society, have called for Boycott, Divestment and Sanctions (BDS), a nonviolent strategy to pressure Israel to respect our basic rights. It is inspired by the South African anti-apartheid movement and the US Civil Rights movement.

We sincerely hope that we can share our table with you after we are free from military occupation and apartheid.

Until then, we appeal to you to respect our struggle for freedom, by declining your participation in this festival.

Via the BDS Nationial Committee.