Army Abducts A Father And His Son in Hebron, Two Children In Jerusalem, And A Man Near Jenin 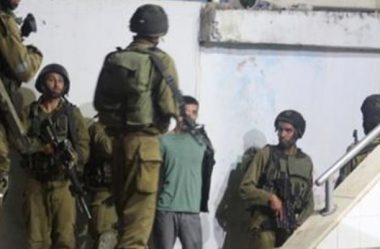 Israeli soldiers abducted, earlier Friday, a Palestinian father and his son, in Yatta town, south of Hebron, in the southern part of the West Bank, in addition to abducting two children in Jerusalem, and one man near Jenin. The army also summoned three Palestinians from Bethlehem for interrogation.

Several army jeeps invaded Yatta town, broke into and searched a few homes, and abducted Rateb Mohammad Abu Samra, 60, and his son Nasser, 36, who is a lawyer and a member of the Local Council.

The army said its soldiers also located a Carlo Gustav rifle, a pistol and ammunition during searches of homes in the town.

In occupied Jerusalem, the soldiers invaded Shu’fat neighborhood, and abducted two children, reportedly after they hurled stones at the Light-Rail Train, causing damage.

The two children were cuffed and blindfolded, before the soldiers took them to an interrogation facility.

The soldiers also invaded the Saff Street area, in Bethlehem city, searched many homes and summoned three Palestinians for interrogation in Etzion military base and security center, north of Bethlehem.

The three have been identified as Mohyeddin Mohammad Souman, 19, Amin Abdullah ‘Ahour, 21, and Mohammad Emad Shweiki, 24.