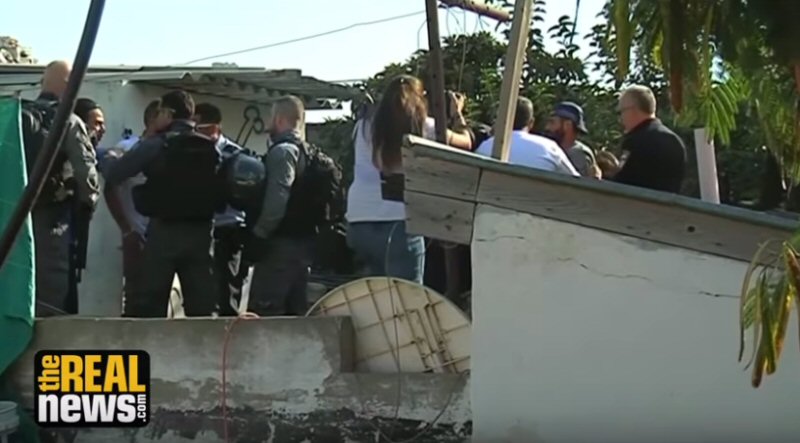 TRNN’s Shir Hever says the eviction of a family in East Jerusalem’s Sheikh Jarrah is part of a larger Israeli strategy to displace Palestinians, but it could inadvertently set a precedent for hundreds of thousands of Palestinians who lost their homes in 1948.

AARON MATE: It’s The Real News, I’m Aaron Mate. Israeli forces have evicted a family in the East Jerusalem neighborhood of Sheikh Jarrah. The Shamesneh family had lived in their home for 53 years. They’re the latest Palestinian family to be forcibly removed as part of Israeli government efforts to hand Arab homes to Jews. Two of the family members were arrested, as well as three Israeli activists who came to protest the eviction. This is one member of the Shamasneh family.

SHIR HEVER: Thanks for having me, Aaron.

AARON MATE: So, talk to us about the scene we saw today. Israeli forces showing up early in the morning, throwing out this family that’s been in this home for decades. And talk also about the campaign that this is a part of.

SHIR HEVER: Yeah. Well, the brutality of this eviction joins a series of similar evictions in this neighborhood of Sheikh Jarrah, which happened until eight years ago, because of massive demonstrations by Palestinians, but also by Israelis and Israeli Jews. These evictions have actually stopped for a while and now it seems like they are going to resume them. There’s been a court decision. There’s been a very long court battle, but the interesting thing here is that even though the family actually was still in the process of appealing their eviction, the police just comes in, in the middle of the night, and takes them out of their home.Now, this is a very important neighborhood, Sheikh Jarrah, because it’s right on the border between East Jerusalem and West Jerusalem. It’s on the eastern side, and it’s a neighborhood with a lot of history. Actually, there were quite a few Jewish residents in that neighborhood until 1948. They were evicted from their homes in 1948, just like the majority of Palestinians who lived in the area that became the state of Israel were evicted from their homes. Of course, in terms of numbers there were a lot more Palestinians being evicted than Jews. But this is a very important case, because it creates a certain precedent. Those Jews that were evicted in 1948 and moved to live in Israel, they received state [inaudible] in how they were they were given [housing, along with] Palestinians who were evicted. So, that was a kind of exchange.The interesting thing is that now right-wing groups are trying to take over the neighborhood of Sheikh Jarrah, saying, ‘Well, these houses used to belong to Jews, so we’re going to now take over them again and kick out the Palestinians,’ which actually means that they’re kicking out families which are already refugees. They’re now becoming refugees for a second time, although the Shamasneh family is perhaps not exactly that case because they moved in in 1963.

AARON MATE: Yeah, you know, Shir, I just want to stress that point that you raised because it’s really interesting. When the Israeli government justifies these evictions of Palestinians now, it says that we’re simply returning Jews to the homes that they used to own. Well, you contrast that to the far greater number of Palestinians. It’s something like at least 700,000 Palestinians were, fled their homes, or evicted from their homes in the war that created Israel in 1948. Certainly, the Israeli government is not taking any steps to return them to their old homes.

SHIR HEVER: Yeah, but you know, just like the man says in the clip, this is not just the Israeli government. He is saying that the Israeli state appears more like a gang, because actually the groups that are promoting the eviction of Palestinian families are not directly the Israeli government, but rather various right-wing NGOs that receive a lot of international funding, mostly from donors in the United States. Specifically this is now an NGO called The Land of Israel Fund. This NGO, what they do is they claim to represent those Jewish refugees who had to leave their homes in 1948, but in fact, it’s not that the previous owners of those homes came to that NGO and asked them, ‘Can you please help us get our homes back?’ That’s absolutely not the case.What is happening is that these right-wing NGOs are actually trying to find, to locate those heirs of people who already have been compensated and they have new homes inside Israel, and they try to get them to sell them the home in order for them to start the process of evicting the Palestinians who live there. Specifically there was a very interesting interview with Dalia Hubra, one of those women whose family was kicked out of their home in Sheikh Jarrah in 1948. She says, ‘I never wanted these Palestinians to suffer what my family suffered. I never wanted them to be evicted. But, this right-wing NGO, they bought the house from us. They made us an offer that we couldn’t refuse and then they go on to evict the family, claiming to represent us when this is absolutely not what we want.’I think this is exactly the way that the Israeli government works with these NGOs together in order to take over this neighborhood, and they’ve even gone so far as to change the name of the neighborhood. We’re still calling it Sheikh Jarrah, which is the original name, but they’ve also invented a kind of Jewish name for it, calling it Shimon HaTzadik.

AARON MATE: Meanwhile, throughout East Jerusalem, you have other neighborhoods where Palestinian families are routinely evicted and have a hard time getting build permits. Can you talk about that context? Building permits, I should say.

SHIR HEVER: Absolutely. I think the neighborhood Silwan is even more well-known as a place where various Zionist NGOs, right-wing NGOs have been taking over lands for a very wide array of excuses and various means with government support, but also with private funding, in order to try to Judaize East Jerusalem. And also in the neighborhood Isawiya in the north, so Sheikh Jarrah is not so special, in that sense. What makes Sheikh Jarrah special is the idea of the precedent of the right to return. That is the reason that when you go to Sheikh Jarrah and you see these evictions, there are mixed demonstrations where Jews and Palestinians demonstrate together.In places like Silwan or Isawiya, very few Jewish Israelis are willing to stand in solidarity with the Palestinians there and try to protest the evictions. But, in Sheikh Jarrah you also see Zionist Jews protesting the evictions, because they know that if you accept this precedent that people who owned property before 1948 may take over that property again through the courts, what will happen if the Palestinian refugees will now demand all of their houses, all of the property that was left behind in 1948 and taken from them by force.Because they’re terrified of that precedent being turned against them, Sheikh Jarrah is very much at the center of the news.

AARON MATE: Shir, I think that says so much about Israel’s history right there. The fact that some Israelis feel compelled to protest the evictions of Palestinians, because they don’t want it to set a precedent for their own eviction, because so many live in homes in areas that used to be Palestinians’ before 1948.

SHIR HEVER: Yeah, and I think this new attempt to take over those houses in Sheikh Jarrah, it’s not exactly the same as the attempts by right-wing Israeli organizations to take it, to build colonies in the West Bank and so on. This one, they’re really spitting in the face of this precedent and they’re really twisting the Israeli legal system to create two classes of people in the most outright and most obvious way, to say, ‘No. Jews have a right that transcends history. Palestinians have no right, regardless of what documents they have or how long they’ve lived in a certain area.’

AARON MATE: And thank you for joining us on the Real News.