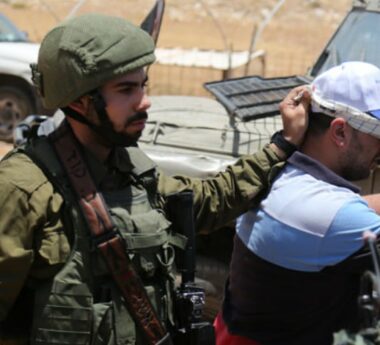 Local sources said the army abducted a former political prisoner, identified as Qaisar Yacoub Enfei’at, from Ya’bad town, southwest of Jenin, after stopping him at a sudden military roadblock that was installed by the soldiers in the town after they invaded it.

They added that Enfei’at was previously imprisoned by Israel for three years, and is the brother of Monadel Enfei’at, who was one of the sixpolitical prisoners who managed to escape from the high-security Gilboa Israeli prison before the soldiers captured them a week later.

In related news, the soldiers detained six Palestinian farmers from the Abu ar-Rob family from Jalbun village, west of Jenin, while they were picking their olive trees in their orchard, isolated behind the illegal Annexation Wall.

The farmers obtained the needed permits to enter their orchards, isolated behind the illegal Annexation Wall, nevertheless, the soldiers invaded the area before detaining and interrogating them for several hours.