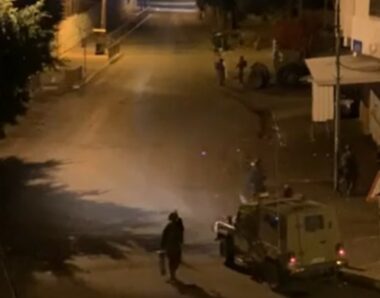 Israeli soldiers injured, on Tuesday at night, many Palestinians in the eastern area of Nablus city, in the northern part of the occupied West Bank.

Media sources said several army jeeps invaded the area to accompany dozens of colonizers into Joseph’s Tomb, in the eastern part of the city, leading to protests.

They added that the soldiers also invaded homes and occupied their rooftops, especially in the Amman Street area, to use them as monitoring towers and firing posts.

Joseph the patriarch is revered by Jews, Muslims, Christians, and Samaritans alike, however, the Israeli military allows Jews to visit as part of organized pilgrimages, despite the site being in ‘Area A’ where the Palestinian Authority (PA) has full control and prohibits Muslims from worshiping at the site.