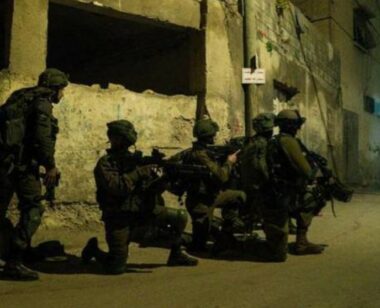 Many Israeli military vehicles invaded, on Tuesday night after midnight, several areas in Bethlehem governorate, south of occupied Jerusalem in the West Bank, before the soldiers stormed and searched homes and stores, in addition to inspecting surveillance recordings.

They added that the soldiers broke into and violently searched many shops and homes, and interrogated several Palestinians while inspecting their ID cards.

They added that the soldiers also inspected surveillance recordings in the invaded properties, while the army also surrounded many areas and installed roadblocks. There have been no reports of protests, injuries, or abductions during the invasions.