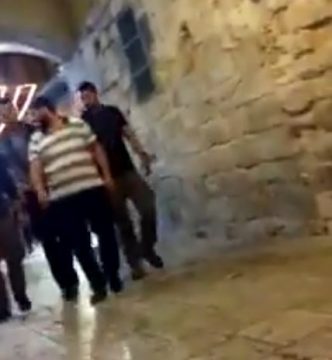 Israeli soldiers abducted, on Wednesday at night, a former political prisoner in front of one of the gates of the Al-Aqsa Mosque, in occupied Jerusalem.

The soldiers stopped the young man, identified as Haitham al-Jo‚Äôba, and abducted him before moving him to an unknown destination.

The Palestinian is a former political prisoner who was previously held and imprisoned by the army.

On Wednesday at dawn, the soldiers extensive and violent searches of homes in the al-‚ÄėIsawiya town, in Jerusalem, and abducted eleven Palestinians.

The soldiers also¬† abducted six Palestinians, including a father and his son, in the West Bank governorates of Ramallah and Hebron, during extensive military searches of homes.