Army Abducts A Journalist, Injures Worshipers, Including A Child, Near Al-Aqsa Mosque 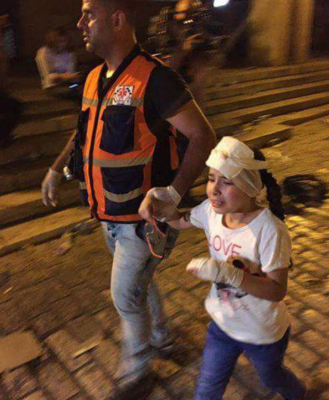 Israeli soldiers attacked, on Tuesday evening, Palestinian worshipers after holding evening prayers in the Gate of the Tribes area, near al-Aqsa Mosque, in occupied East Jerusalem, wounding dozens of Palestinians, including a child and a journalist, in addition to abducting a journalist.

The WAFA Palestinian News Agency has reported that the soldiers assaulted the Palestinians in a surprise attack near al-Ghazali area, striking them with batons, in addition to firing many gas bombs and concussion grenades at them.

The Palestinian Red Crescent (PRC) has reported that its medics moved three Palestinians to a hospital, including a child, only ten years of age, who was shot with concussion grenades in her head and arm.

PRC medics also provided the needed treatment to thirteen Palestinians, who were shot with rubber-coated steel bullets; one of them is a journalist, identified as Fatima al-Bakri.

In addition, the soldiers abducted a journalist identified as Fayez Abu Rmeila, and took him to an unknown destination.