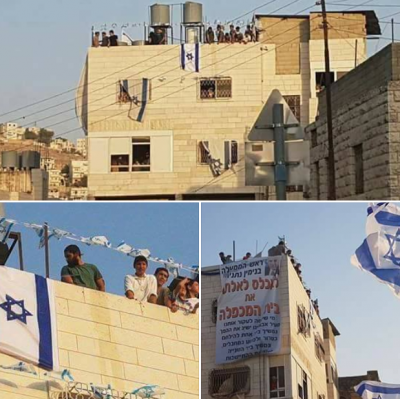 Many Israeli colonists invaded, Tuesday, a Palestinian home in the Old City of Hebron, in the southern part of the occupied West Bank, and attacked the family before occupying the rooftop and raising Israeli flags and signs on the property. Israeli soldiers handed the family temporary orders occupying their stores.

Media sources in Hebron said the assailants invaded the home of Ali Ibrahim Abu Rajab, and his sons, in the Old City, and assaulted the family, while Israeli soldiers just stood outside without intervening.

The property is a three-story home, near Abu ar-Reesh military roadblock, which leads to the Ibrahimi Mosque, in the heart of Hebron’s Old City.

The Israeli extremists stormed the property, assaulted the family while insulting and threatening them, causing anxiety attacks, especially among the children, in addition to hurling stones and trash at the family, and the property.

Israeli soldiers and officers are now surrounding the building, and preventing the Palestinians, including relatives of the family from approaching.

Resident Jalal Abu Rajab told WAFA Palestinian News Agency that the soldiers handed him an order informing him that the army is now “in temporary possession of three stores owned by his father,” who is a lawyer identified as Salah Abu Rajab, located next to his home, which was illegally occupied by the colonists, who assaulted him and his family.