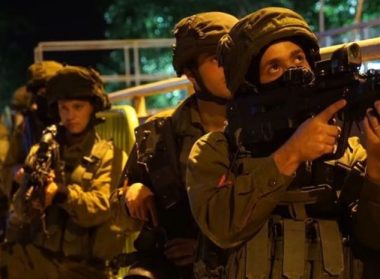 Israeli soldiers abducted, Saturday, a young Palestinian man from Jenin, in the northern part of the occupied West Bank.

The abducted young man, identified as Saqer Abdul-Qader Hamdiyya, was taken by the soldiers close to the Annexation Wall, on Palestinian lands, west of the al-Yamoun town, west of Jenin.

Hamdiyya, from al-Yamoun, was cuffed and blindfolded before the soldiers took him to an unknown destination.

On Saturday at dawn, the soldiers abducted a young man in Hebron city, in the southern part of the occupied West Bank.