Army Abducts A Palestinian, Summons Two For Interrogation, In Jerusalem 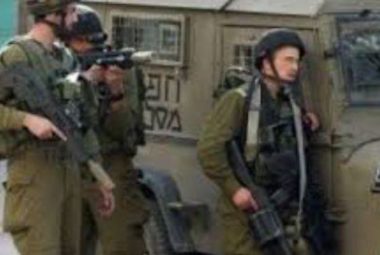 Israeli soldiers abducted, on Tuesday at dawn, a young Palestinian man, and summoned two others for interrogation, in occupied East Jerusalem.

Media sources said the soldiers abducted Rawhi Mahmoud Al-Kolaghassi, 23, after storming his family’s home and ransacking it, in the Sa’adiyya neighborhood, in the Old City.

It is worth mentioning that, al-Kolaghassi was banned by the Israeli army from entering the Al-Aqsa Mosque for a period of six months, which ended just a month ago.

They added that the soldiers summoned for interrogation Mahmoud Younis, 24, from Sa’adiyya neighborhood, and Rami al-Fakhouri, 28, from Bab Hotta neighborhood.

In Hebron, in southern West Bank, the soldiers abducted a Palestinian man from his home in Beit Ummar town, north of the city, just two weeks after demolishing his home.

On Monday at night, the soldiers abducted two Palestinians in Jenin, in northern West Bank, and one in Ramallah, in the central part of the occupied territory.