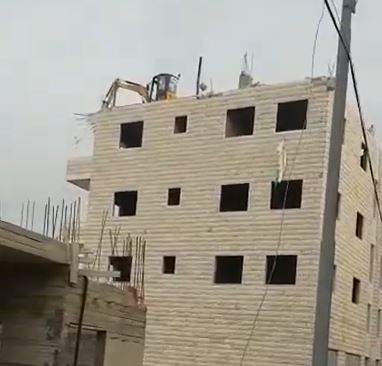 Israeli soldiers forced, Tuesday, a Palestinian to demolish sections of his home in Wadi al-Hummus neighborhood, in Sur Baher town, southeast of occupied East Jerusalem, after an Israeli court ordered the demolition for “being too close” to the Annexation Wall.

Ziyad Hamamda, a member of the “Committee for Defending the Lands of Wadi al-Hummus,” said the building is four floors and a basement, and added that the Palestinian, Mohammad al-Atrash, had to demolish the top two floors.

Hamada stated that al-Atrash had to demolish the floors to avoid paying the excessively high fines and fees, in addition to the over-exaggerated costs of demolition, which he will face if the City Council carries out the demolition using its workers and equipment.

Hamada added that the court only gave al-Atrash one week to carry out the demolition, and that the order targets the entire building.

In July, the army demolished ten Palestinian residential buildings, and detonated one, as part of an Israeli plan to demolish sixteen buildings, housing dozens of families in Wadi al-Hummus, for being “close to the Wall.”