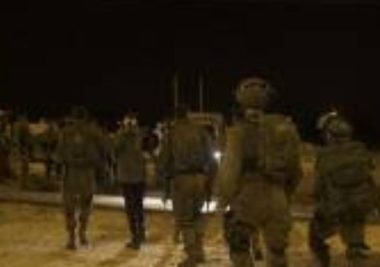 Israeli soldiers invaded, on Friday at dawn, Nabi Saleh village, northwest of the central West Bank city of Ramallah, stormed and violently searched homes, before abducting a wounded child, and assaulted a man with pepper-spray, causing serious wounds to his eyes.

Mohammad Tamimi, a local nonviolent activist against the Annexation Wall and colonies, said the soldiers abducted a wounded child, identified as Mohammad Fadel Tamimi, 16, after storming and ransacking his family’s home, and assaulting him.

It is worth mentioning that Mohammad was seriously injured by Israeli army fire, on December 15, 2017, when the soldiers shot him with a rubber-coated steel bullet in his face, especially since the bullet penetrated his face and reached his brain, an issue that forced the surgeons to remove a section of the skull after his brain became swollen.

In addition, the soldiers assaulted a man, identified as Mahmoud Tamimi, after breaking into his home, and used continuously spayed his face with pepper-spray, causing serious burns, including in his eyes.

The Palestinian was rushed by local medics to the Istishari hospital, where the doctors decided that he needs a cardiac catheterization, and a retina surgery.

Furthermore, the soldiers stormed the family homes of Mohannad and Maher Tamimi, and threatened “severe punishment,” if the two do not turn themselves in by Friday noon.

It is worth mentioning that Nabi Saleh has been subject to daily Israeli military invasions and violations, including violent searches of homes, and the abduction of many Palestinians, especially children.

Also at dawn, the Qabatia town, south of the northern West Bank city of Jenin, and attacked protesters with live fire, gas bombs and concussion grenades, wounding two with live rounds, and causing dozens to suffer the effects of teargas inhalation, in addition to abducting a third Palestinian.

In the Gaza Strip, Israeli navy ships fired live rounds at fishing boasts, in Palestinian territorial waters near the shore, in the northern part of the coastal region.

The attack did not lead to casualties, but forced the fishermen back to the shore without being able to fish and provide for their families.