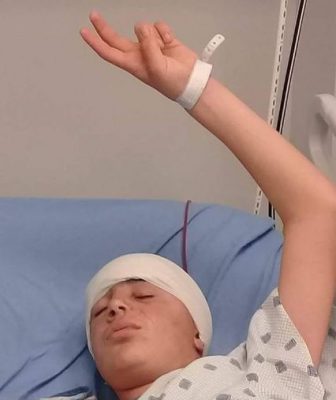 The wounded Palestinian child, who is also a former political prisoner, Mohammad Fadel Tamimi, 15, underwent a complicated but successful skull reconstruction surgery, Sunday, at the Istishari Palestinian hospital, in the central West Bank city of Ramallah.

Palestinian surgeons carried out the surgery with utmost precision to construct the face and skull of the child, who was shot with a rubber-coated steel bullet, fired by an Israeli soldier from a very close range.

Tamimi, from Nabi Saleh village, north of Ramallah, was in a very critical condition following his injury, which took place on December 15, 2017, especially since the bullet penetrated his face and reached his brain, an issue that forced the surgeons to remove a section of the skull after his brain became swollen.

Palestinian specialist surgeons operated on the child, Sunday, and were able to successfully reconstruct his skull. 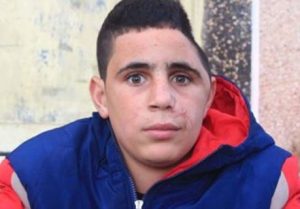 Following his complicated surgery, and amidst his pain, the child was seen raising the victory sign.

It is worth mentioning that Tamimi was abducted and imprisoned by the soldiers for three months, then was abducted again on February 26th, despite the seriousness of his condition, and was only released after legal and human rights groups, and media outlets managed to shed a light on his serious condition, and exposed the Israeli violations.

Mohammad’s cousin Ahed Tamimi, 16, wa abducted by Israeli soldiers for allegedly pushing an Israeli soldier who was standing in her yard laughing, just an hour after shooting Mohammad in the head. Her imprisonment has sparked an international movement calling for her release.

Israeli Court Extends Detention of Ahed Tamimi into Next Month