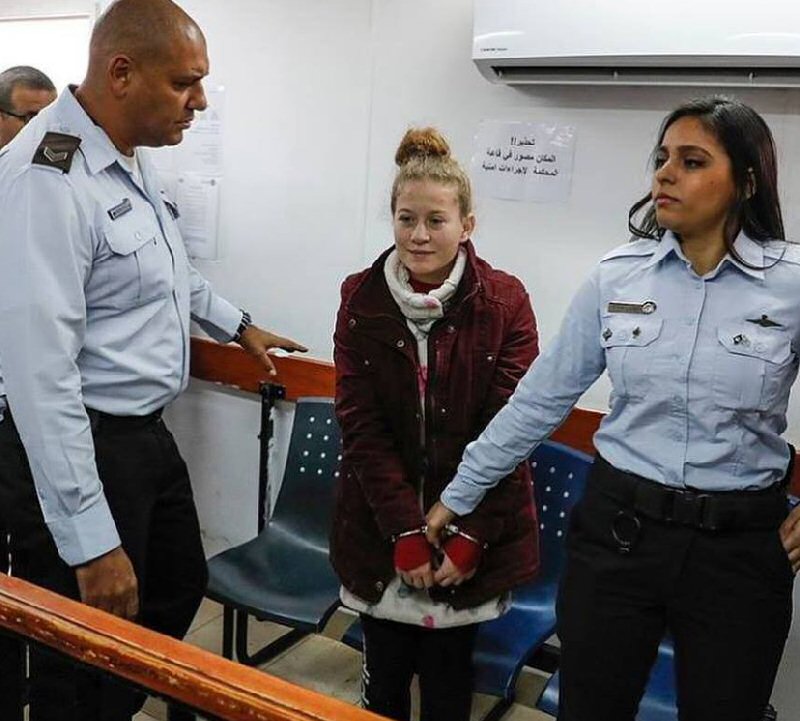 On Monday, one day after her 21 year old cousin Nour was charged with assaulting an Israeli soldier, 16-year old Ahed was also charged with the same crime, along with ‘interfering with a soldier’s duties’ and stone throwing.

The charges came after Ahed, her cousin and her mother were seen on a video posted on the internet pushing a soldier off their property, just after 14-year old Mohammed Tamimi was shot point-blank in the face by a rubber-coated steel bullet, losing an eye and part of his face, and requiring surgery to remove part of his skull.

This is the video that led to the abduction of the three female family members, and their charges – which carry potential sentences of many years in prison:

Activists supporting Ahed and her family say that the message from the Israeli government is that Israeli soldiers should be allowed to invade the village, take their land, construct a Wall in the middle of the town, shoot the children of the village, and the Palestinian villagers should just sit back and allow the soldiers to do these things with complete impunity, without resisting or protesting in any way.

The Tamimi family has been at the forefront of the non-violent resistance movement in Palestine, leading weekly protests in the village of Nabi Saleh for over a decade.

A prominent Israeli journalist called for raping Ahed Tamimi, while Israeli Defense Minister Avigdor Lieberman called for her to spend all of her life in prison.

Originally under suspicion over charges of money-laundering and bribery, Lieberman was formally indicted in December of 2012, on lesser charges of fraud and breach of trust. His party was recently the focus of a corruption probe within the Israeli political spectrum.

During the weekly non-violent protests, the Nabi Saleh residents are joined by international supporters and sometimes Israelis who march together to the site of the construction of the Israeli Annexation Wall on village land.

As Jaclynn Ashly pointed out in an Al Jazeera article in September 2017, “Ahed Tamimi was just 14 when she rose to international prominence through the release of a video and a series of photos capturing her desperate attempts to save her 11-year-old brother, Mohammad, from the grips of an Israeli soldier in 2015.

“In the video, filmed during one of the weekly protests that had been staged in Nabi Saleh for years, Ahed is seen hitting and biting the hand of the masked soldier as her mother and aunt hit and tug at his clothes, struggling to pull the soldier away from Mohammad.

“Afterwards, scores of journalists rushed to the village to interview Ahed, with NBC News describing the blond-haired, blue-eyed teenager as the ‘poster child’ for the Palestinian struggle.

“However, while her newfound fame cast a spotlight on the village’s violent experiences with the Israeli occupation, it also made Ahed an easily recognisable figure among Israeli forces stationed in the West Bank.

“The harassment began immediately following the video’s release, as Israelis called her a “terrorist” on social media and threatened to kill her, the family says. Bassem, Ahed’s father and a long-standing leader in the village, said that her 19-year-old brother, Waed, was detained after the release of the video. At the start of his 10-month stay in Israeli jail, Ahed’s mother, Nariman, received permission to enter Israel to visit him, and Ahed tagged along.

“’When we passed a checkpoint near Jerusalem, the Israeli soldiers got on the bus and immediately singled her out’, Nariman told Al Jazeera. ‘While everyone else was permitted to pass, Ahed was pulled off the bus and told she wouldn’t be allowed into Israel.’

“During the village’s protests, Israeli forces would often scream Ahed’s name and shout curses at her. ‘Look! It’s Ahed Tamimi. Shoot her!’ Bassem recalled one soldier as saying.

“The family was often scared for their daughter, he added: ‘Whenever the soldiers recognise her, they do something to make her life difficult. Every time she left the house, we were scared something would happen to her.’ Ahed was even forced to stay at her cousin’s home in Ramallah, where she attends school, to avoid the danger of passing through Israeli checkpoints on her way from Nabi Saleh.”

In response to the abduction of Ahed and her mother, the Palestinian prisoner support organization Samidoun issued a statement which read, in part, “Samidoun Palestinian Prisoner Solidarity Network denounces the arrest of Ahed Tamimi and Nariman Tamimi, the latest of over 450 Palestinians arrested by Israeli occupation forces following U.S. President Donald Trump’s declaration of recognition of Jerusalem as the capital of Israel. Issa Qaraqe of the Palestinian Prisoners Affairs Commission stated that approximately half of those detained, like Ahed, Abdul-Khalik Burnat and Fawzi al-Junaidi, are children. There are hundreds of Palestinian children jailed by Israel and frequently subject to beatings, abuse, and interrogations without parents or lawyers present in violation of the law. We urge people of conscience around the world to take action to demand freedom for Ahed and her fellow detained and jailed Palestinian children in occupation detention centers, interrogation centers and prisons – and for Nariman Tamimi and all detained and imprisoned Palestinians.”