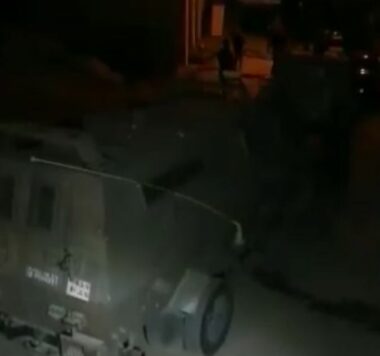 Israeli soldiers abducted, on Wednesday at dawn, eight Palestinians, including a former political prisoner, from their homes in several parts of the southern West Bank governorate of Hebron.

The soldiers also abducted a former political prisoner, identified as Mohammad Zeitoun Halayqa, from his home in Sa’ir town, northeast of Hebron.

In addition, the soldiers abducted Mohammad Arafat Halayqa, from Shiokh town, northeast of Hebron, in addition to Emad Ezreiqat, 26, and Wajdi Tirawi, from Taffouh town, west of Hebron, and Issam Suleiman Atawna, from Beit Kahil, northwest of the city.

During the invasions, the soldiers interrogated many Palestinians across the Hebron governorate, after storming and searching their homes and summoned one Palestinian, identified as Halayqa, for interrogation.

In related news, the soldiers abducted three young Palestinian men from their homes in Beita town, south of the northern West Bank city of Nablus.