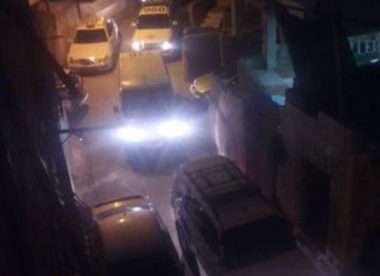 The soldiers also invaded the home of former political prisoner Obeida Amira, 30, in Sur Baher town, southeast of Jerusalem, and abducted him, in addition to abducting his uncles Ahmad Amira and Amira Amira, who rushed to his home after hearing a commotion in the property.

The soldiers assaulted them with clubs and taser guns, before abducting them, and took them to an interrogation facility.

Furthermore, the soldiers stormed and ransacked many homes in the town, and interrogated dozens of residents, in addition to shutting down several gas stations in Hizma nearby town.

The two towns have been under siege for the past ten weeks, in addition to constant invasions of homes and properties, as part of illegal collective measures imposed by the army to stop the ongoing protests.

The soldiers also abducted Roshdi Yasser Khatib from his home in Hizma town.