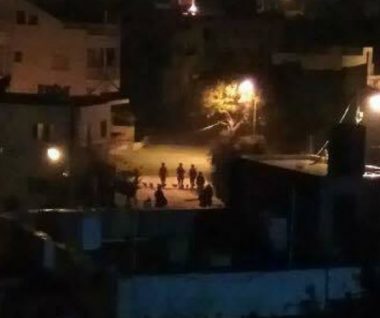 Israeli soldiers abducted, on Tuesday at dawn, five Palestinian men from their homes in the West Bank governorates of Hebron, Ramallah and Qalqilia, during violent invasions and military searches of homes.

In Hebron, in the southern part of the occupied West Bank, the soldiers abducted a former political prisoner, identified as Shehda Amro.

The soldiers also invaded Beit Ummar town, north of Hebron, before storming into the home of former political prisoners Sufian Zaki Bahar, 42, and Ala’ Mousa Za’aqeeq, 25, and summoned them for interrogation in the nearby Etzion military base and security center.

In related news, the soldiers claimed to locate a “Carlo” gun during searches in Yatta town, south of Hebron.

In addition, the army searched homes in Ramallah, in central West Bank, before abducting Jad Fahed Barghouthi, Ala Husam Rimawi and Sharhabeel Bustafa Salama, from their homes in Beit Rima town, and al-Jalazoun refugee camp.

Also in Ramallah, the soldiers demolished an under-construction home in Jibiya Village, north of the city.