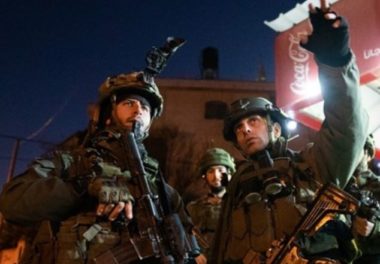 Israeli soldiers abducted, on Sunday at dawn, four Palestinians children, after the army invaded and ransacked many homes, in Bethlehem, south of occupied East Jerusalem in the West Bank, while on Saturday evening, the soldiers abducted the father of one of the detained children.

It added that the soldiers also searched homes in Teqoua’ town, southeast of Bethlehem, and abducted Riyadh Talal a-‘Amour, 15.

It is worth mentioning that, on Saturday evening, the soldiers abducted Riyadh’s Father, Talal al-‘Amour, after stopping him at the Container military roadblock, north of Bethlehem, while he was returning home from work.

In addition, a group of illegal Israeli colonists attacked, overnight until morning hours Sunday, many cars on the Jenin-Nablus road, in northern West Bank, in addition to hurling insults at the Palestinians and attempting to assault them.

In related news, the soldiers abducted many Palestinians in the al-‘Isawiya town, and summoned many others for interrogation, in occupied East Jerusalem, during extensive invasions and violent searches of homes, leading to protests.