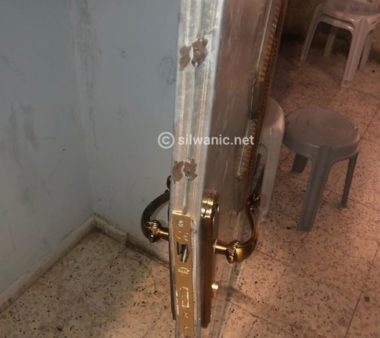 Israeli soldiers abducted, on Sunday at dawn, many Palestinians in the al-‘Isawiya town, and summoned many others for interrogation, in occupied East Jerusalem, during extensive invasions and violent searches of homes, leading to protests.

Mohammad Abu al-Hummus, a member of the Follow-Up Committee in al-‘Isawiya, said the invasions were carried out by dozens of soldiers who stormed and ransacked many homes, leading to serious property damage.

Abu al-Hummus added that the soldiers deliberately smashed front doors of many homes, in addition to causing damage to furniture and belongings during the violent searches of properties.

He also said that the soldiers summoned many Palestinians, including children, for interrogation in several police stations and security centers, in occupied Jerusalem.

Many Palestinians protested the invasions, violent searches and abductions, and hurled stone at army and the police, while the soldiers fired live rounds, rubber-coated steel bullets, gas bombs and concussion grenades.

Abu al-Hummus said al-‘Isawiya has been subject to ongoing invasions, which started more than two weeks ago, and included abductions, causing damage to homes and property, in addition to delivering demolition orders targeting many homes and structures.

He also said that dozens of Palestinians have been injured during these invasions, some after being repeatedly assaulted by the soldiers, and added that the army is constantly deployed on main areas of the town, and in front of many homes and residential buildings.