Army Abducts Five Palestinians In Hebron, One In Salfit And One In Bethlehem 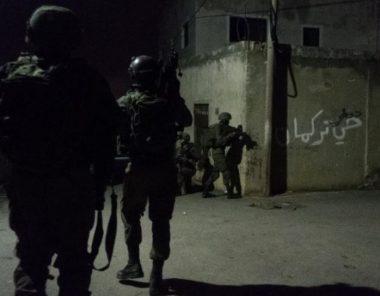 Israeli soldiers abducted, on Wednesday at dawn, five Palestinians, including a woman, in several parts of the southern West Bank governorate of Hebron, in addition to one in Salfit, in northwest West Bank, and one in Bethlehem, the Palestinian Prisoners’ Society (PPS) has reported.

In addition, the soldiers invaded homes in the al-‘Arroub refugee camp, north of Hebron, and abducted Malek Abdul-Fattah Jawabra.

The soldiers also abducted Rif’at Al-‘Alama, from his home in Beit Ummar town, north of Hebron.

In related news, the soldiers installed many roadblocks at main roads leading to villages and towns in Hebron governorate, and searched dozens of cars while interrogating many Palestinians while inspecting their ID cards.

Also at dawn, the soldiers invaded Jenin city, Wad Burqin and the al-Hadaf area, in the northern West Bank city of Jenin, violently searched many homes, and abducted one Palestinian.