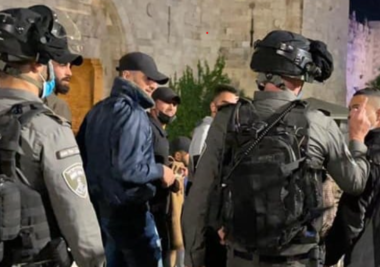 Media sources said the soldiers invaded and ransacked homes and shops, in the Bab Hotta area, before abducting Abdul-Fattah al-Fakhoury and his brother, Anan, in addition to their uncle Saeb al-Fakhouri.

It is worth mentioning that the soldiers assaulted and injured Hotheifa before abducting him.

Also on Wednesday evening, the soldiers shot at least five Palestinians, and caused many to suffer the effects of tear gas inhalation in Beit Dajan village, east of the northern West Bank city of Nablus, and abducted a child the al-Lubban ash-Sharqiya village, south of the city.

On Wednesday at dawn, the soldiers abducted twenty-two Palestinians during the extensive and violent invasion and searches of homes, in several parts of the occupied West Bank.