Army Abducts Five Palestinians In Nablus, Jerusalem, And In Bethlehem 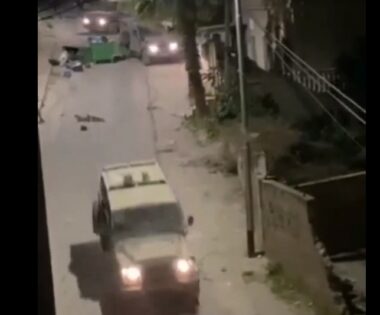 Israeli soldiers abducted five Palestinians from their homes in Nablus, Jerusalem, and Bethlehem in the occupied West Bank on Thursday dawn.

In Nablus, in the northern West Bank, the soldiers abducted Bilal Eshteyya from his home in Tal village, Amir Eshteyya from Rafidia, and Hamdi Dweikat in Balata al-Balad.

The soldiers fired live rounds, gas bombs, and rubber-coated steel bullets at Palestinians who protested the invasion of Tal village.

The soldiers also abducted a former political prisoner, Daoud Abu Sbeitan, from his home in the at-Tour town, in occupied Jerusalem.

In the Al-Khader town, south of Bethlehem, the soldiers stormed and searched a few homes and abducted a young man, Omar Mousa.

On Wednesday evening, the soldiers injured an elderly Palestinian man in his home in the Old City of Al-Khader.

It is worth mentioning that the army invaded many areas across the West Bank, especially the Nur Shams refugee camp in Tulkarem, Rafidia near Nablus, Hebron city, and Halhoul town.

On Wednesday night, the soldiers killed Omar Mohammad Elyan, 20, and injured at least eleven in addition to abducting three after many army vehicles invaded Silwad town, northeast of the central West Bank city of Ramallah.

On Wednesday morning, the soldiers killed a Palestinian lawyer, Mohammad Hasan Assaf, 34, after firing many live rounds at his car in the Industrial Area in Nablus city, in the northern part of the occupied West Bank.