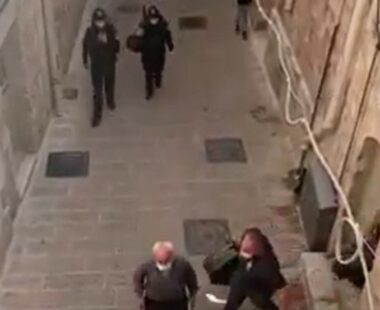 Israeli soldiers abducted, Wednesday, four Palestinians, including the deputy head of the Waqf and Islamic Endowment Department, in Jerusalem and Tulkarem, in the occupied West Bank.

Media sources in Jerusalem said the soldiers abducted Najeh Bkearat, the deputy head of the Waqf and Islamic Endowment Department, after stopping and searching his car near Bab al-Asbat in the city.

They added that Israeli intelligence officers were present with the soldiers when they abducted Bkearat, and took him to an interrogation facility in the city.

The soldiers also invaded Jabal al-Mokabber town, in Jerusalem, and abducted Anas Qonbar from his home.

Also at dawn, the soldiers injured five workers from Bir Nibala town, in addition to abducting four Palestinians, including one woman, from their homes in the al-Jalazonerefugee camp, near the central West Bank city of Ramallah.

On Tuesday evening, dozens of Palestinians from Burqa town, north of the northern west bank city of Nablus, intercepted an attack by illegal Israeli colonizers against their town, and forced them to leave.