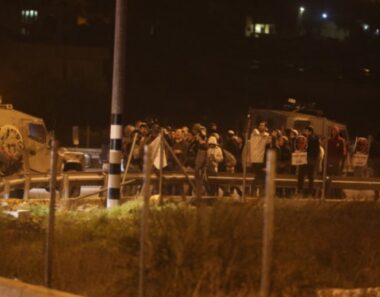 Dozens of Palestinians from Burqa town, north of the northern West Bank city of Nablus, intercepted on Tuesday evening, an attack by illegal Israeli colonizers against their town, and forced them to leave.

Ghassan Daghlas, a Palestinian official who monitors Israel’s illegal colonialist activities in northern West Bank, said the Palestinians noticed the Israeli colonizers invading their community, and forced them to leave.

Daghlas added that Israeli soldiers also invaded the village after the colonizers stormed it and started firing gas bombs and concussion grenades at the Palestinians.

A similar attack took place on the nearby Nablus-Jenin Road when the colonizers hurled stones at Palestinian cars, in addition to a military invasion into Sielet ath-Thaher, south of the northern West Bank city of Jenin, leading to protests; Israeli soldiers also fired gas bombs and concussion grenades at the Palestinians.

It is worth mentioning that the colonizers frequently invade the areas and their surrounding Palestinian lands as part of their attempts to reestablish the Homesh colony which was evacuated in the year 2005.

The colony was built on lands, privately owned by Palestinians from Burqa town, in addition to Sielet ath-Thaher and al-Fandaqumiya, south of Jenin.