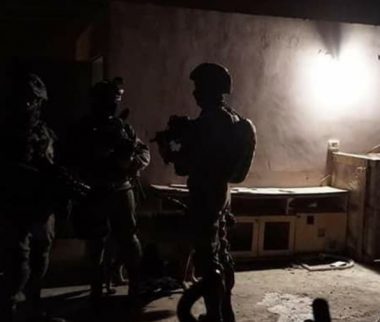 Israeli soldiers abducted, on Sunday at dawn, three Palestinians from Nablus, and installed roadblocks near Jenin, in the northern parts of the occupied West Bank.

Media sources in Nablus said the soldiers invaded many neighborhoods in the Jenin city, broke into and searched homes, before abducting two Palestinians, identified as Rami Abdul-Haq, 19, from Rafidia neighborhood, and Bayan Raed ad-Dbeik, 16, from Fatayer area.

In addition, the soldiers abducted Bader Tashtoosh, after stopping him at Za’tara military roadblock, south of Nablus.

On Sunday morning, the soldiers invaded neighborhoods in Ya’bad town, south of the northern West Bank city of Jenin, and installed several roadblocks.

The soldiers also installed roadblocks around the Ya’bad, in addition to ‘Arraba town junction and Jenin-Nablus road, before stopping and searching dozens of cars, and interrogated many Palestinians while inspecting their ID cards.