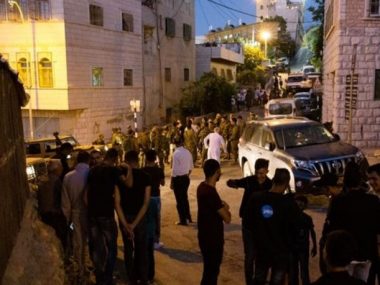 After groups of extremist illegal Israeli colonizers attacked homes and residents in the center of Hebron city, in the southern part of the occupied West Bank, Israeli soldiers turned the area into a closed military zone to the Palestinians, literally imprisoning them in their homes.

The Israeli measure came after groups of fanatic colonists gathered in Tel Romedia neighborhood, and the Shuhada Street, in the heart of Hebron city, and organized protests calling for removing every Palestinian from the area.

The fanatics came from several illegal colonies in Hebron, and other parts of occupied Palestine, while the soldiers started imposing further restrictions not on the assailants, but on the Palestinian natives of the occupied city.

The attacks witnessed a serious escalation over the last two days with more extremists arriving in the city to participate in these violations.

On Friday evening, a group of extremist colonizers attacked Palestinians in Tal Romeida neighborhood,  while Israeli soldiers stood and watched, before attacking the Palestinians, and abducted one of them.