Army Abducts One Palestinian In Qalqilia, Two Near Jenin 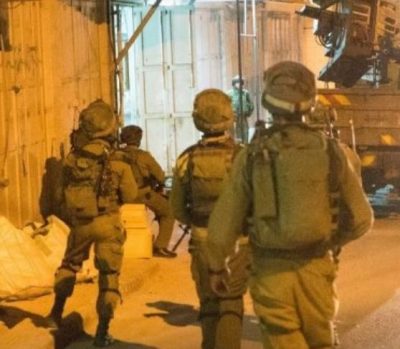 Israeli soldiers abducted, on Wednesday at dawn, a young Palestinian man from Qalqilia, and two others in Qabatia town, south of Jenin, in the northern part of the occupied West Bank.

The Qalqilia office of the Palestinian Prisoners’ Society (PPS) has reported that the soldiers invaded and searched homes in the city, and abducted a young man, identified as Abdullah Walweel, 25.

In addition, the soldiers invaded and searched many homes in Qabatia town, south of Jenin, and abducted Mohammad Abdul-Rahman Assaf, 20, and Suleiman Ziad Nazzal, 18.

Eyewitnesses said the soldiers also fired many gas bombs, concussion grenades at many youngsters, who hurled stones at the invading army vehicles.