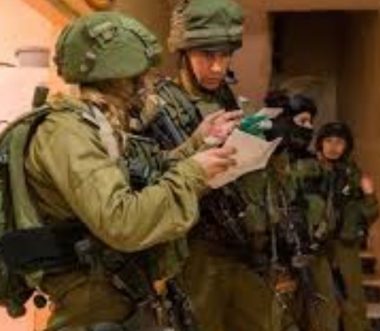 Israeli soldiers abducted, on Thursday at dawn, five young Palestinian men, from their homes, in several parts of the occupied West Bank.

In addition, the soldiers invaded several neighborhoods in the northern West Bank governorate of Nablus, violently searched homes and abducted Jihad Afeef al-Akka, and his brother, Mohammad, in addition to Mahdi al-Akka.

In Hebron, in the southern part of the West Bank, the soldiers invaded homes in Beit Ummar town, north of the city, and abducted Mohammad Breigheeth, 24, before moving him to Etzion military base and security center.

The soldiers also installed a roadblock in Jouret Bahlas area, at the northern entrance of Hebron city, stopped and searched dozens of cars, and interrogated many Palestinians while inspecting their ID cards.

Furthermore, several army jeeps invaded the al-Khader town, south of Bethlehem, also searched homes and abducted a child, identified as Ghassan Ahmad Salah, 16, the son of the coordinator of the Popular Committee against the Wall and Colonies in the town.