Army Abducts Seven Palestinians, Including A Blind Man, In Ramallah 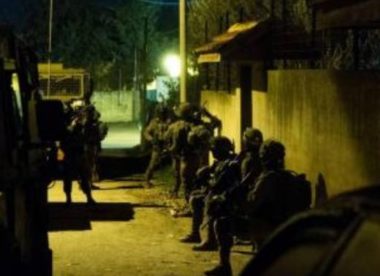 Israeli soldiers abducted, on Sunday at dawn, seven Palestinians, including a blind man, from several villages and towns, in Ramallah governorate, in central West Bank.

Media sources in Ramallah said dozens of soldiers invaded Kobar village, north of the city, before breaking into several homes and violently searching them.

The soldiers also abducted a blind man identified as Sheikh Ali Hannoun, and a former political prisoner, Maher Shreiteh, after invading their homes and searching them, in the al-Mazra’a al-Gharbiyya village, northwest of Ramallah.

In addition, the soldiers abducted Khaled Ahmad Qa’ad, from his home in Abu Qash town, north of Ramallah.

Another Palestinian, identified as Rashad Karaja, was abducted from his home in Safa town, west of Ramallah.

It is worth mentioning that the soldiers also invaded the home of Khaled Nawabeet, in Ramallah, and violently searched it.