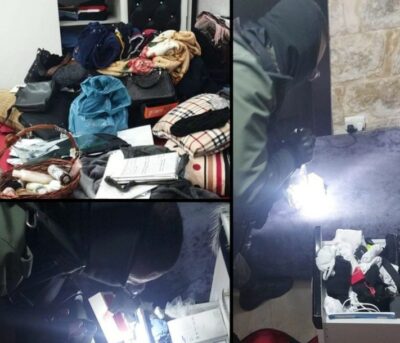 Israeli soldiers invaded, Sunday, several Palestinian homes in Silwan town, the Old City and Sur Baher, in the occupied capital, Jerusalem, before storming and ransacking homes, including the home of Jerusalem governor, and abducted seven Palestinians, including two children, the Wadi Hilweh Information Center In Silwan (Silwanic) has confirmed.

Silwanic said many soldiers and police officers invaded the al-Wista neighborhood in Silwan before storming and ransacking the home of Jerusalem governor Adnan Gheith.

It is worth mentioning that Gheith has been repeatedly abducted, interrogated, and imprisoned due to Israel’s illegal policies of barring the Palestinians from having any political presence in the occupied Palestinian capital.

In addition, the soldiers abducted Ashraf Jaber, and Khalil Shweiki, 15, from their homes in the Batn Al-Hawa neighborhood in Silwan, in addition to another child, identified as Wajd Abu Hlayyil, 15, from Ein al-Louza neighborhood.

The soldiers also invaded and ransacked the home of Fawzi al-Basity in the Old City of Jerusalem and interrogated him.

In addition, the soldiers abducted three employees of the Waqf and Islamic Endowment Department in Jerusalem, identified as Luay Abu Sa’ad, Khalil Tarhouni, and Raed Zghayyar.

In related news, the soldiers stormed and ransacked the home of Najeh Bkeirat, in Sur Baher village, before abducting his son, Salah.

On Saturday at night, protests took place in the Batn Al-Hawa neighborhood after many Israeli military jeeps invaded it; the soldiers fired gas bombs and concussion grenades.