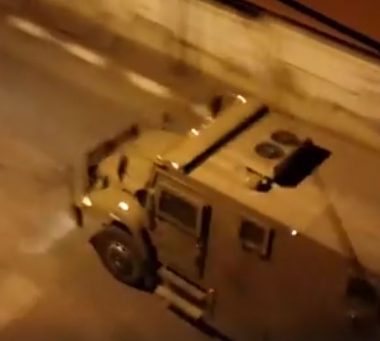 Israeli soldiers abducted, on Monday ay dawn, fifteen Palestinians, including two women, and a former government Minister, from their homes in several parts of the occupied West Bank.

In Ramallah, in central West Bank, the soldiers invaded Budrus village, west of the city, searched homes and abducted a woman, identified as Ibtisam Abdul-Hamid.

The soldiers interrogated the woman and her family, during very violent searches of their home, causing excessive damage.

Several Palestinians also scuffled with the soldiers while trying to stop their violent searches, and field interrogations.

In Jenin, in northern West Bank, the soldiers abducted Abdul-Jabbar Jarrar, 55, after storming his home in the city, and attacking him along with his family.

The soldiers also detonated the main door leading to his home, before storming it. It is worth mentioning that Jarrar, a school teacher, is a former political prisoner who spent ten years in Israeli detention center.

In addition, the soldiers invaded the home of former government minister, Wasfi Kabaha, and interrogated him and his son, Osama; both former political detainees who were recently released from prison.

On his Facebook page, Kabaha said that the soldiers detained his family in one room, while searching and ransacking the property for more than one hour, causing excessive damage.

In Nablus, in northern West Bank, the soldiers also invaded and ransacked homes in the governorate, and abducted Awadallah Eshteyya, from Salem town, east of the city, and summoned his brother, Adam, for interrogation.

Furthermore, the soldiers rammed with their jeep a Palestinian teenage boy while riding his bicycle near the Tiwani village, east of Yatta, south of the southern West Bank city of Hebron, and left him on the side of the road.

Israeli soldiers abducted, on Monday at dawn, six Palestinians in the northern West Bank governorates of Qalqilia, Nablus and Jenin, after the army stormed and ransacked many homes and interrogated several Palestinians.

Also at dawn, the soldiers abducted a former political prisoner, in addition to breaking into the home of a former government minister, before interrogating him and his con, in Jenin, in northern West Bank.