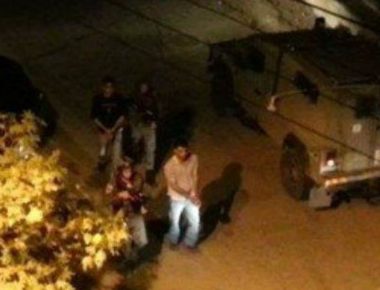 Israeli soldiers abducted, on Saturday at dawn, six Palestinians in Qalqilia, Tulkarem and Jerusalem, in the occupied West Bank.

The army abducted the three young men, in addition to stopping and searching cars, before questioning many Palestinians while inspecting their ID cards.

In occupied Jerusalem, the soldiers abducted a young man in the Sa’adiyya neighborhood, in the Old City, and invaded Hizma town, north of the city, before searching and ransacking several homes.

The Palestinian, who remained unidentified at the time of this report, is known as Musaharati, the name given to the person who walks and beats a drum in residential areas to wake people up so that they can pray and eat sohour which is the meal Muslims eat before the beginning of the fast during the holy Muslim month of Ramadan.

In related news, the soldiers invaded many streets in the southern area of Hebron city, in the southern part of the West Bank, and fired gas bombs and rubber-coated steel bullets at Palestinians, protesting the invasion.

On Friday afternoon, the soldiers assaulted a young Palestinian man in Nablus Street area, in Jerusalem, and abducted him.