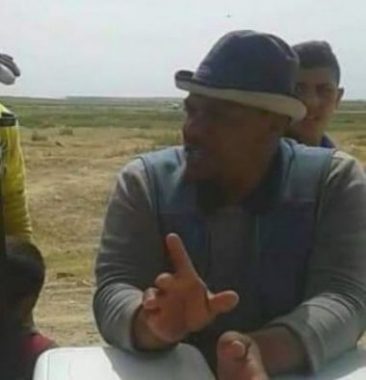 The Palestinian Health Ministry in the Gaza Strip has reported that a Palestinian man died, on Saturday at dawn, from serious wounds he suffered after Israeli soldiers shot him with live fire, several days ago.

The Ministry identified the slain Palestinian as Hussein Salem Abu ‘Oweida, 41, and added that he was shot by the army hundreds of meters away from the border fence, east of Gaza city.

The Palestinian became paralyzed after an Israeli army bullet struck him in his spine, before he was moved to the Shifa Medical Center, in Gaza City, but died from his wounds and serious complications.

In a video message before his death, Hussein said that he was just selling ice cream and refreshment near the protest tent, hundreds of meters away from the “border fence” to provide for his children in the besieged and imprisoned coastal region.

He also voiced an appeal to President Mahmoud Abbas, and various officials, to help him out, and provide him with medical treatment.

“I call on the entire world, and President Mahmoud Abbas, to have mercy on me; I want to walk again” he said, “Am here at the Shifa hospital, I am paralyzed man. I pray for help, pleading for help – calling on them to see my difficult condition… and nothing more.”

On Friday, the Health Ministry said a young man, identified as Yasser Sami Habib, 24, succumbed to wounds sustained from Israeli army gunfire during the protests on May 14.

Two other Palestinians who were injured, during the protests on May 14, also succumbed to their wounds on Thursday evening. They have been identified as Ahmad Ali Qattoush, 23 Mohannad Bakr Abu Tahoun, 21. Their deaths bring the number of Palestinians, killed by Israeli army fire since the Great Return March procession started on Palestinian Land Day, on March 30th, 2018, to 116 Palestinians, while more than 13.000 Palestinians have been injured, including 332 who suffered life-threatening wounds.

Gaza Strip hospital and medical centers lack basic supplies and equipment due to the lengthy and deadly siege on the Gaza Strip, and the repeated military offensives.