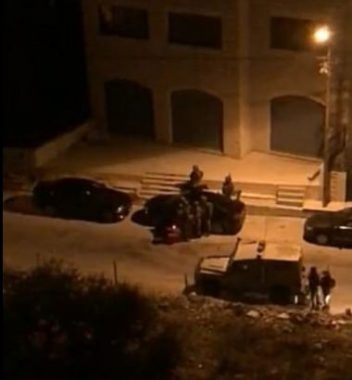 Israeli soldiers abducted, on Tuesday at dawn, at least ten Palestinians in several parts of the occupied West Bank, during extensive and violent searches of homes and property.

The soldiers searched and ransacked at least seven homes Hebron city, in the southern part of the West Bank, and interrogated many Palestinians while inspecting their ID cards, before abducting Jamal Ali ‘Aadi.

Also in Hebron, the soldiers smashed the main door of a home, belonging to former prisoner, Mos’ab Monir Ekhlayyel, 22, and summoned him for interrogation in Etzion military base and security center.

Similar invasions targeted the al-Ma’ajeen and Rafidia areas, in the northern West Bank city of Nablus, before abducting Baha’ Ghassan Thouqan, and his brother Bara’; the two have two other brothers who are imprisoned by Israel.

In Nablus, in northern West Bank, the soldiers invaded the home of the imprisoned university teacher, Ghassan Thouqan, and abducted his son Bara’, in addition to detaining his other son, Baha’, for several hours, and confiscated the family car.

It is worth mentioning that Ghassan and his son, Moath, were abducted by the soldiers nearly a month ago.

In addition, the army invaded many areas Qalqilia, in northern West Bank, where the soldiers also used a surveillance drone in many neighborhoods, in addition to invading Salfit in northeastern West Bank.