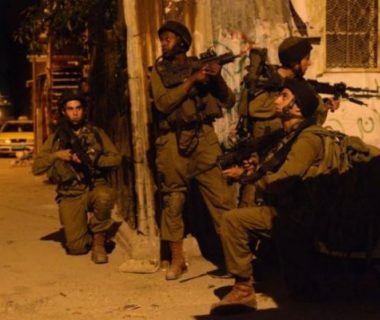 Israeli soldiers abducted, on Sunday at dawn, at least ten Palestinians, including two children, during invasions and violent searches of homes, in different parts of the occupied West Bank.

Furthermore, for the second time in just a few weeks, the army invaded Kobar village, near Ramallah, and abducted Ibtisam al-‘Abed, the mother Omar, who was taken prisoner on June 21st, after stabbing three Israeli settlers to death in Halamish colony. The soldiers also abducted her other son Khaled.

The soldiers also abducted a Palestinian, identified as Ma’moun Qabaha, 28, after stopping his car at the Barta’a military roadblock, southwest of Jenn, in the northern part of the West Bank.

The army said its soldiers stopped and searched the car at the roadblock, and located an M-16 rifle.

The Palestinian Prisoners’ Society (PPS) said the soldiers have abducted ten Palestinians in several parts of the West Bank, and moved them to several interrogation centers.